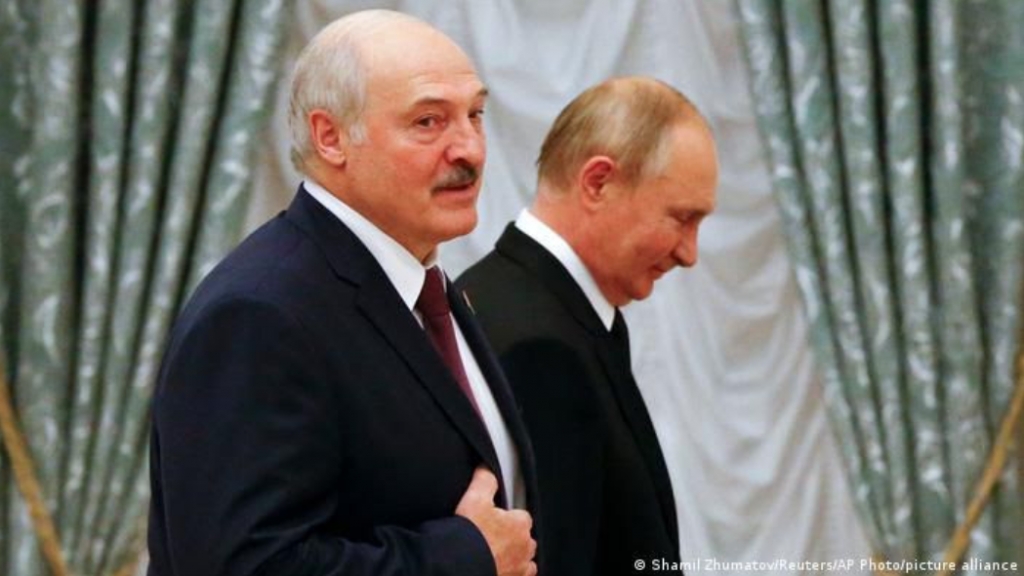 This September, Russia launched Zapad 2021, a series of war games designed and then publicised to show off its military firepower to the West. It is thought that 20,000 troops will take part in the exercises, but this year, a more sizeable contingent will be from Belarus, the nation pushed out of the European fold in a reaction to its despotic President, Alexander Lukashenko.

After apparently staging a fraudulent election in August 2020, Lukashenko’s regime was hit by a raft of EU sanctions, which were intensified last month after the Belarusian Air Force’s unprecedented grounding of a Ryanair flight in Minsk. Similarly horrified, the British government responded to the incident with a number of trade and financial restrictions, and the Biden administration sanctioned 23 officials and 21 entities who the US Treasury view to have close commercial and political ties to Lukashenko.

The EU’s first round of sanctions last year displayed their intent to undermine Lukashenko’s government by paralysing the core sectors of the Belarussian economy. However, a risk report released by the British government last week has demonstrated that so far, the bloc’s sanctions haven’t had the desired effect. While Belarus’ GDP contracted by 0.9% in 2020, with the pandemic undoubtedly a significant factor in its recession, the economy quickly rebounded, reportedly growing by an impressive 3.3% in the first seven months of 2021.

Explaining this unexpected recovery, the risk report notes that Belarus has been aided by a series of ‘solid agreements’ for Russian oil and gas. This is an understatement if ever there was one. Further cementing Russo-Belarusian ties, the Kremlin announced earlier this month that it will continue to provide Lukashenko with natural gas at extraordinarily discounted rates, a big step on the path towards integrating the two nation’s energy markets. Russia will also fund a further $630 million in loans to see Belarus through to the end of 2022.

Prior to the EU’s preliminary sanctions in August 2020, talks of economic integration had stalled, but since the measures were imposed, Lukashenko has reportedly met Putin six times. This rekindled relationship between the two powers shows that the West’s sanction-induced isolation of Belarus has played straight into Putin’s hands. The President has long desired for Lukashenko to fall squarely under his influence and the West has provided the final push.

The issue of Belarusian democracy is of upmost importance, but the EU’s strategic blunder could easily backfire on the bloc and its British and American allies. While a Belarussian-Russian customs union is not necessarily an economic threat, the pair’s ongoing and intensifying military integration is a different matter altogether. Putin has deployed fighter jets to join Belarusian planes in patrolling their border, and Belarus’ western perimeter now bristles with Russian anti-aircraft missiles. Concerning? Yes. Avoidable? Entirely. The economic restrictions imposed on Belarus have had little bite, but as is often the case with its interventions, the West will reap what its sowed.

It would be easy to dismiss Russo-Belarusian exercises like Zapad 2021 as mere sabre rattling, but in truth, an escalation in hostilities, though not imminent, is a growing threat. Putin continues to justify the build-up of Russian troops on his western border by arguing the NATO is doing the same. Yet he now has a new partner in Belarus, estranged from the West, depriving the EU and the US of its ‘buffer state’ and providing an ideal base for military wargaming and provocative manoeuvres.

With this leverage, handed to Putin on a plate by the NATO nations, in addition to a potential period of instability in Europe due to upcoming German and French elections, the appearance of Russian troops on Poland’s border, once improbable, is becoming more likely. Like Putin, Lukashenko is wise to the EU’s internal struggles and has started to needle a particularly painful sore point – border policy. In the past month, Poland, Lithuania, and Latvia have all declared states of emergency due to the waves of refugees arriving at their borders, often accompanied and provided with Belarusian tourist visas by Lukashenko’s armed forces.

The situation is clearly grave and with the West in dire need of refocusing its foreign policy on the Asian arena, it is incomprehensible that it has decided to start a fire on its own doorstep. Belarus’ Putin-backed economy has proven itself resilient against British, European and American sanctions, and the restrictions imposed on those linked to the Lukashenka regime seem to be having little effect. Economics aside, a wider debate is required in Western policy circles regarding the efficacy of sanctions in the first place.

Consider Russia. After years of restrictions, the Kremlin’s operations in the Middle East are ongoing, and if anything, interference in the UK’s EU referendum and the 2016 US Election shows that far from taming Putin, sanctions have allowed him to stoke an anti-Western narrative at home, emboldening his administration abroad.

NATO members should pull back from the brink and reconsider their approach. While Putin remains in power, so will Lukashenko, or someone of his ilk. A détente, with Belarus being brought back in from the cold through offers of economic and political reintegration in return for democratic reform, will save the West from a major geostrategic and military fiasco.