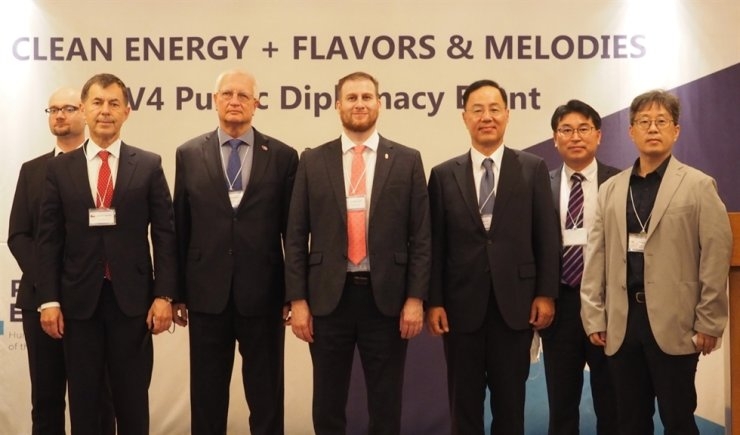 The embassies of the Czech Republic, Hungary, Poland, and Slovakia in South Korea explored the scope for cooperation on clean energy in a public diplomacy event at Lotte Hotel Seoul, on May 26.

The said central and eastern European countries belong to an alliance called the Visegrad Group, or V4.

From July 2021 to June 2022, the presidency of the alliance belongs to Hungary and the Embassy of Hungary in Korea took the lead in organizing the event in Seoul.

Hungarian Ambassador to Korea Mozes Csoma opened the event, which consisted of a conference on clean energy, a drink tasting opportunity, and a concert, highlighting the deep cooperation between the V4 countries.

Ambassador of the Czech Republic to Korea Gustav Slamecka said it is interesting to see how clean energy can nicely blend with the melodies and flavors.

Slamecka added that they fully recognize that Korea is among the world leaders in scientific research and development and applied science.

Jan Kuderjavy, the ambassador of Slovakia to Korea, hoped the event will contribute to deeper scientific collaboration between the four countries of Visegrad and Korea.

The ambassador also elaborated on how countries can cooperate on reaching the goal of climate neutrality by 2050.

Polish Charge d'Affaires Arletta Brzozowska said in a welcome message sent via video that scientific cooperation is a very important area not only among the V4 countries but also with Korea.

Min Won-ki, ambassador for Science Technology & Innovation from Korea's Ministry of Foreign Affairs, emphasized that Korea is expanding its R&D investment in various climate technologies to accelerate the clean energy transition and its strength in applied science and the V4 countries have a competitive edge in basic science, the cooperation between them will create great synergy.