The sounds of Speechless, where words are superfluous 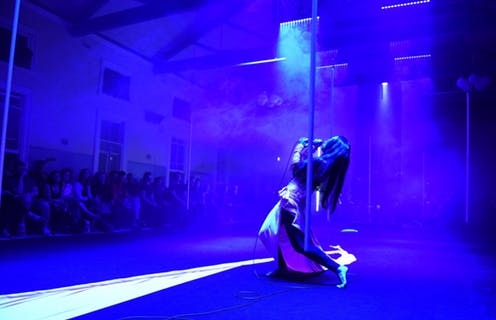 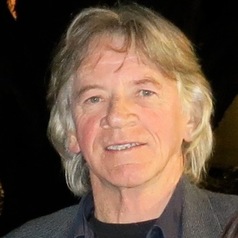 Speechless is the new opera by award-winning composer Cat Hope, co-commissioned by the Perth Festival and Tura New Music. This is Hope’s powerful response to the Australian Human Rights Commission’s 2014 report into children in immigration detention.

Hope created what she describes as a “graphic score” derived from drawings and graphics extracted from the Report. This system of “animated graphic notation” is explained by Tura as “the representation of music through the use of visual symbols in place of traditional music notation”.

This graphic score serves as both the text and music of the opera. Rather than singing arias as in a conventional opera, the singers make sounds, not words, in response to the notation. The score is read during performance by the musicians through the Decibel New Music Ensemble iPad app.

The result proved to be an absorbing and visceral experience. 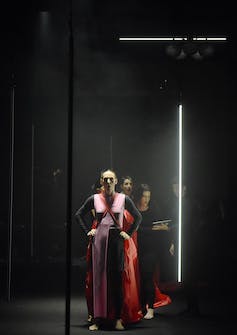 Speechless is the result of a ‘graphic score’ created by Cat Hope. Toni Wilkinson

The opera took place in the community hall at the Sunset Heritage Precinct, on the banks of the Swan River in Dalkeith. As the performers were miked it is difficult to gauge the acoustics of the hall, but it has a wooden floor and I could feel the vibrations of sound through my feet.

Seating was arranged around a central oval space, with vertical tube lighting and hanging swathes of strongly hued material.

These were later transformed from hanging curtains and wrapped by the performers into what appeared like backpacks, or baggage, weighing down and inhibiting to some degree the movement of some of the soloists, giving them a certain stateliness in their movements.

The featured soloists in the Thursday night performance were soprano Judith Dodsworth, heavy metal band vocalist Karina Utomo, throat singing specialist Sage Pbbbt and Perth soprano Caitlin Cassidy, who substituted for the Iranian singer Tara Tiba who could not be present. All performed with clarity and strength.

The soloists’ voices were ably complemented by a combined community choir of some 30 voices. Their range of ages and physicality provided a rich comment on the diversity of peoples affected by political upheavals and natural catastrophes.

The expressiveness and variations of the sounds served to create empathic emotive resonances. This was even more evident when the soloists could improvise sections based on their own particular vocal practices.

In particular, the guttural roaring of Karina Utomo into a microphone, and the anguished sounds emitted by Sage Pbbbt were evocative of the grief, outrage, fear, and anger that could well be expressed by children in peril.

The choir provided often subtle harmonies and backing sounds to the soloists and the orchestra, composed of the Decibel New Music Ensemble and the Australian Bass Orchestra. As the name implies, only the lower register of the musical scale is utilised – bass notes below middle C. The orchestra was superbly conducted by musical director, Aaron Wyatt. 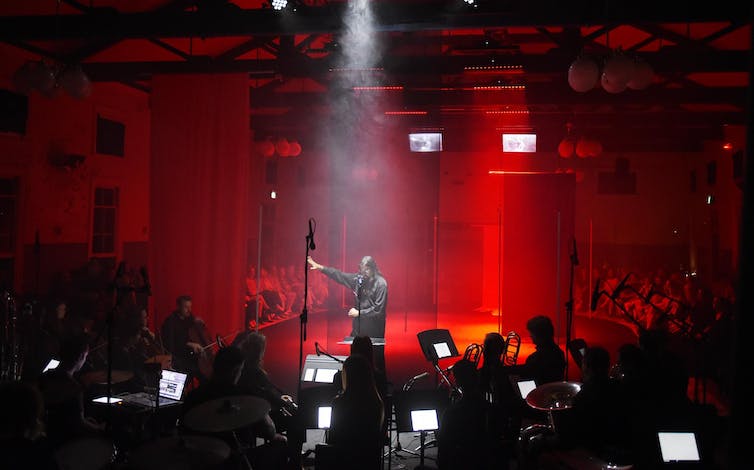 This use of these lower registers created sometimes haunting, sometimes cacophonous, visceral waves of sound. At times, these built from a gentle hum into great crescendos of percussion and brass, sending vibrations through one’s body.

In creating such physical resonances on and through the body, this seemed to work more effectively, at least for me, than much of the orchestral music of the Romantic era. However, that was admittedly playing to very different contexts.

Many of the sounds conveyed particular emotions, and towards the end of the performance, the mingling of the voices of the four lead vocalists plus the choir evoked the crying of children.

The performance certainly creates an emotional connection and visceral response to the issue of children in detention, that is arguably far more effective than words on a page, or even dialogue on a stage.

Hope speaks of the power of music being in its abstractness. She states that it is not her intention to speak on behalf of others, rather this work constitutes her personal response to the issue.

This was an excellent opera-theatre experience, creating a nuanced commentary on an emotive issue without the need to preach to the audience. The visceral quality of the sound and the power of the emotions expressed through voice and instruments amply made a point about children in immigration detention. Speechless allows their plight to be heard. Words were superfluous.

Speechless was performed as part of the Perth Festival from February 26 to March 3.