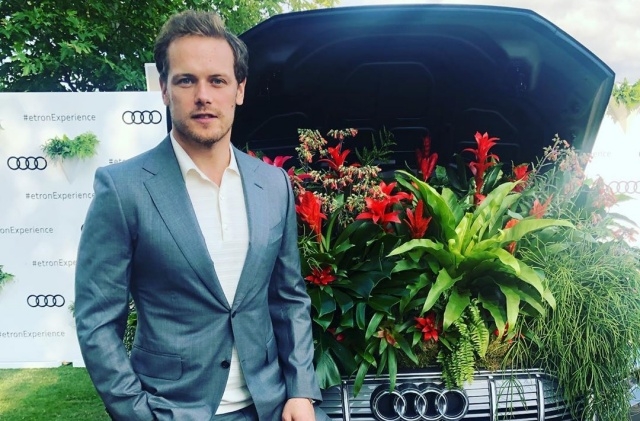 Sam Heughan just won an award for his portrayal as Jamie Fraser, and this is the first award for the “Outlander” this year. With his latest accomplishment, Caitriona Balfe did not miss to send her greeting to her co-star.

As usual, the actress has been sweet with her message again just like she always has. When Heughan thanked his fans and everyone who voted for him to win in the Saturn Awards, Balfe commented below the post and wrote on Twitter, “Congratulations Hon! So well deserved!! I’ll pop the champers shall I?”

Such kind of response that usually starts the rumors that Caitriona Balfe and Sam Heughan are dating but not anymore, since the actress just married her fiance last month. Her marriage proved that she and Sam are really just very close friends who work hard on the set to realistically portray their characters as husband and wife who are very much in love with each other.

Sam’s first award at the Saturn’s

Entertainment Weekly reported that this Sam Heughan’s first award at the 45th Annual Saturn Awards. This is actually his very first for his acting stint in “Outlander” because although he has been nominated a lot of times in the past, in various award-giving bodies, he always failed to win. The Saturn Awards honors TV dramas and movies featuring fantasy, sci-fi and horror genres.

Sam Heughan won the “Best Actor” award by defeating Kit Harington for “Game of Thrones,” Grant Gustin for “The Flash,” Andrew Lincoln for “The Walking Dead,” Bill Pullman for “The Sinner,” Seth MacFarlane for “The Orville” and Jeffrey Wright for HBO’s “Westworld.” It was revealed that the actor was not able to attend the ceremony to personally receive his award as he is currently busy filming “Outlander” with Caitriona Balfe.

Apart from his win, Heughan has another thing to celebrate for, and this is the launch of his new business. He recently introduced his whiskey brand called the Sassenach Spirits, and he is out promoting his label. In his promo, the actor wrote on Instagram: "Thinking about the journey that led me here and the road still to be discovered. Can’t wait for you to experience what we are creating with @sassenachspirits! Feel so grateful to have you all along for the ride."