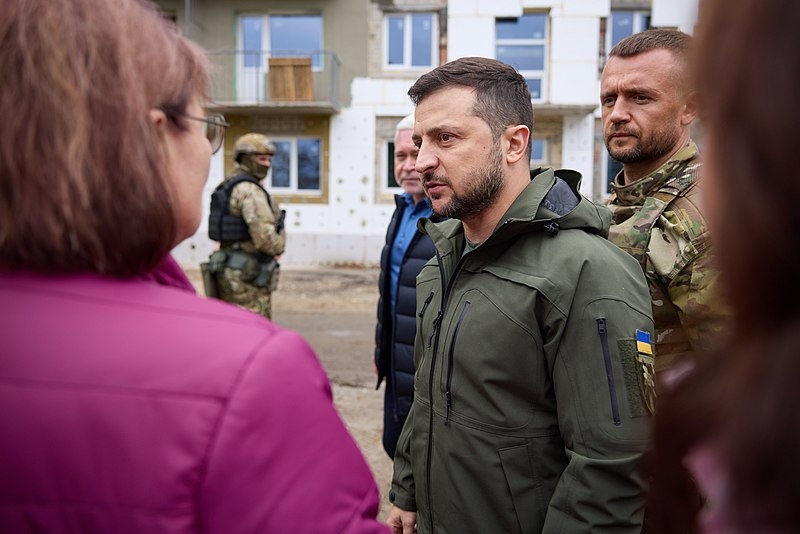 Ukrainian President Volodymyr Zelenskyy paid a visit to the city of Izium which was recaptured by Ukrainian forces in recent days as part of its ongoing counter-attack. This follows the major gains made by Ukrainian troops in their offensive in the southern and eastern territories.

Zelenskyy visited Izium this week, days after the city was retaken by Ukrainian troops as part of their ongoing offensive that has seen major gains. The visit also comes as Kyiv said it has reclaimed around 8,000 square kilometers of its territory since the start of September, most of which are in the northeastern region of Kharkiv.

The Ukrainian flag was also hoisted up in Izium, formally marking its recapture by Ukrainian forces following Zelenskyy’s visit.

“The view is very shocking but it is not shocking for me…because we began to see the same pictures from Bucha, from the first occupied territories…so the same destroyed buildings, killed people,” Zelenskyy told reporters, referring to the discovery of six dead bodies that had traces of torture in the reclaimed villages, with prosecutors forming investigative teams following the incident.

One of the first occupied towns, Bucha, which is near Kyiv, was where the bodies of many Ukrainians were discovered, many of which were tortured and lying in the streets back in March, after Russian forces withdrew from the area.

The recapturing of Izium by Ukrainian forces is seen as a major blow to Russia, as the area served as a logistical hub “where Russia was supplying its troops that are further east in the Donbas region…around places like Kramatorsk and Sloviansk,” said Hoda Abdel-Hamid of Al Jazeera.

The war is moving toward its seventh month since Russia invaded Ukraine back in February.

German Chancellor Olaf Scholz spoke with Russian leader Vladimir Putin this week, with Scholz urging Putin to withdraw his troops from Ukraine. Scholz also called on Putin to comply with the deal overseen by the United Nations and Turkey to export Ukrainian grain.

Scholz told Putin during their conversation “not to discredit and continue to fully implement” the grain deal due to the stretched food supply.