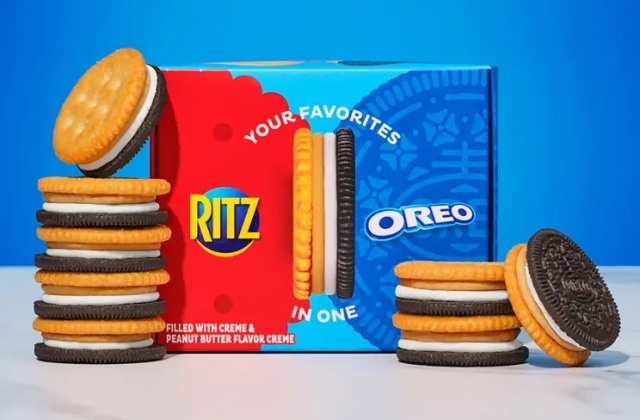 Oreo and Ritz biscuit brands are teaming up to produce a new kind of snack that will be sweet and salty. The two are very popular worldwide, and putting them together would be like twice the success.

Mondelez International, which owns the two famous biscuits, launched the "Oreo x Ritz" biscuit sandwich. The company is using them to maximum advantage since they are already a favorite among consumers around the world.

As per CNN Business, the Oreo x Ritz limited-edition snack is one part cracker and one part cookie. They are combined together by a layer of peanut butter-flavored cream and cookie cream.

On its release date, which is Thursday, May 26, Mondelez International is giving away free packs of the new snack starting at 12 p.m. The giveaway will continue until supplies last, but customers must still pay $3.95 for the shipping fee since it is being done online via the company's website.

Ritz's senior brand manager, Alexis Yap, said in a statement that over the last few years, they have been looking for innovative partnerships as well as experiences to ignite excitement around the brand's classic, buttery cracker. For this, he said that they just could not resist the chance to collaborate with the Oreo team to create a snack that is part salty and part sweet since Oreo is a chocolate cookie.

"RITZ and OREO are always looking for ways to surprise fans with unique, can't-stop-talking-about product innovations," Anna Whitelaw, Mondelēz International's spokeswoman, told USA TODAY in a separate statement. "We saw some chatter on social and thought, why not? Sounds delicious! After a few tries, 12 to be exact, we found the perfect combination."

Finally, as mentioned in Food & Wine, Oreo and Ritz have a long history, and the former even dates back to 1912, while Ritz was released in 1934. The two have been housed under Mondelez International since 2012, but this is the first time that the two brands have worked together to offer a new kind of snack to the consumers.