FxWirePro: Quick Run Through On ECB And RBA Previews And EUR/AUD Hedging Perspectives 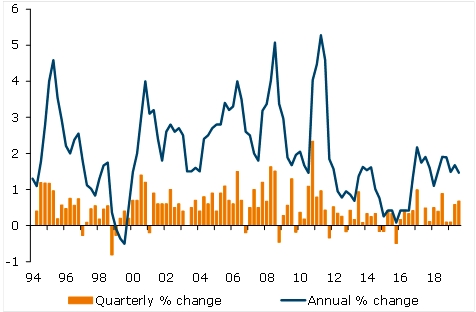 New Zealand’s consumer price inflation was a little higher than expected in the September quarter, rising 0.7 percent q/q. The annual inflation rate dropped from 1.7 percent to 1.5 percent, largely due to the variability in fuel prices; underlying inflation looks to have been steady, Westpac Research reported.

This result will be significant for the Reserve Bank. Not only was it higher than the RBNZ’s forecast of a 0.5 percent rise for the quarter, but all of the surprise was on the more persistent non-tradables side. Non-tradables prices tend to be driven more by domestic conditions, and hence are more receptive to monetary policy settings.

The acceleration in non-tradables inflation over the last year, along with the recent signs of a pickup in the housing market, show that monetary policy is working in the areas where we would expect it to work.

The Reserve Bank of New Zealand (RBNZ) is not off the hook by any means. Total inflation continues to linger in the lower half of the 1-3 percent target range, due to very weak price pressures on the tradables side.

"We expect the RBNZ to cut the OCR by another 25 basis points to 0.75 percent in November, a move that financial markets have already fully priced in. But we’re not forecasting further rate cuts beyond that, and the pickup in domestic inflation certainly gives the RBNZ some defence against having to resort to the dark arts of unconventional monetary easing," the report added.

Petrol prices were 0.8 percent lower on average over the quarter, compared to a 5.5 percent rise in the September quarter last year, which was due to higher world oil prices and the introduction of the Auckland regional fuel tax. The difference between these two quarters was enough to knock 0.3 percent off the annual inflation rate.

Food prices rose by 1.3 percent for the quarter, to be up 1.8 percent on a year ago. Meat prices were boosted by the African Swine Fever outbreak in China, which has squeezed global supplies of pork and created extra demand for other proteins.

There was also a notable rise in prices for dining out, which may have been a delayed response to the large minimum wage hike in April.

"We expect annual inflation to remain close to, but below, the 2 percent midpoint of the RBNZ’s target range over the next couple of years. The recent fall in the New Zealand dollar will temporarily boost tradables inflation, with the effects most likely to be seen over the first half of next year," Westpac Research further commented in the report.