FxWirePro: Most Asian markets in green except Japan, gold hovers around $1,600 mark 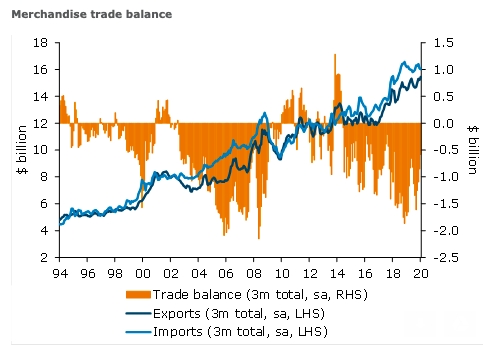 New Zealand’s unadjusted trade balance saw a deficit of $340 million, which was stronger than expected. Exports fell seasonally, but not by as much as expected. The majority of the supply chain disruptions due to COVID-19 didn’t occur until February, ANZ Research reported.

The annual deficit narrowed to $3.87bn. Imports in January weakened only slightly to $5.07bn after December data was revised up to $5.12bn.

But strength in pricing saw the value of forestry exported lift 18% m/m while meat returns eased slightly. The latter was expected as the prices being offered by Chinese importers eased back just prior to Christmas.

January was a particularly strong month for imports of petroleum products with import values up 20.7% m/m. That said, petrol was down 1.6% y/y and back 9.7% y/y in the 3mths to January primarily due to lower oil prices.  Imports of textile products lifted sharply having gained 27.5% m/m on a seasonally adjusted basis.

Pharmaceutical imports were back 12% y/y in January and are down 1.4% in the past year. Supply disruptions for goods imported from China are expected to impact this category in February which is concerning.

"Going forward, we expect a major reduction in both exports and imports in February and March due to the slowing of supply chains in and out of China. Exports will also be impacted by the drought in NZ which is starting to decrease milk output but increase the immediate supply of meat for export. However, the impact of the drought on trade data will be dwarfed by the restrictions on shipping that is occurring due to port congestion and lack of availability of refrigerated containers," ANZ Research further commented in the report.