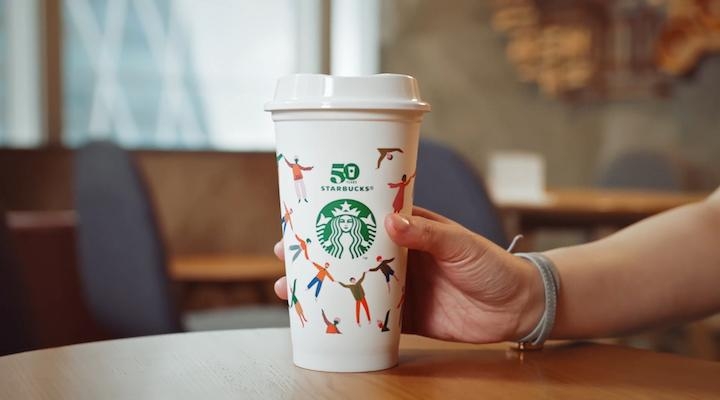 Starbucks Korea allowed each person to buy up to 20 drinks at a  time during its 50th anniversary on Sept. 28 when it gave out drinks in  "grande" size reusable cups with special designs.

Customers are urging Starbucks Korea to limit purchases to one drink per person during special merchandise giveaways to prevent resellers of their limited-edition goods from keeping others waiting in the line.

Starbucks Korea allowed each person to buy up to 20 drinks at a time during its 50th anniversary on Sept. 28 when it gave out drinks in "grande" size reusable cups with special designs.

However, those who sell limited-edition Starbucks goods online for a higher price showed up in numerous Seoul branches to order as many as they could to collect the reusable cups.

The situation caused other customers to wait for over an hour to get their beverages.

It was not the first time that customers were inconvenienced when Starbucks Korea offered special merchandise goods.

Last year, a reseller bought 300 cups of iced coffee to get 17 "Summer Ready Bags" and threw away all of the beverages.

Back then, each Starbucks customer need to order 17 drinks, including several seasonal beverages, to get a "Summer Ready Bag" or limited edition camping chair.

The situation resulted in fights among those waiting to purchase drinks, prompting police response.

Starbucks Korea enjoyed a 3 percent sales increase on-year in 2020 to 1.92 trillion won despite the pandemic, partly because of the popularity of the limited edition goods.