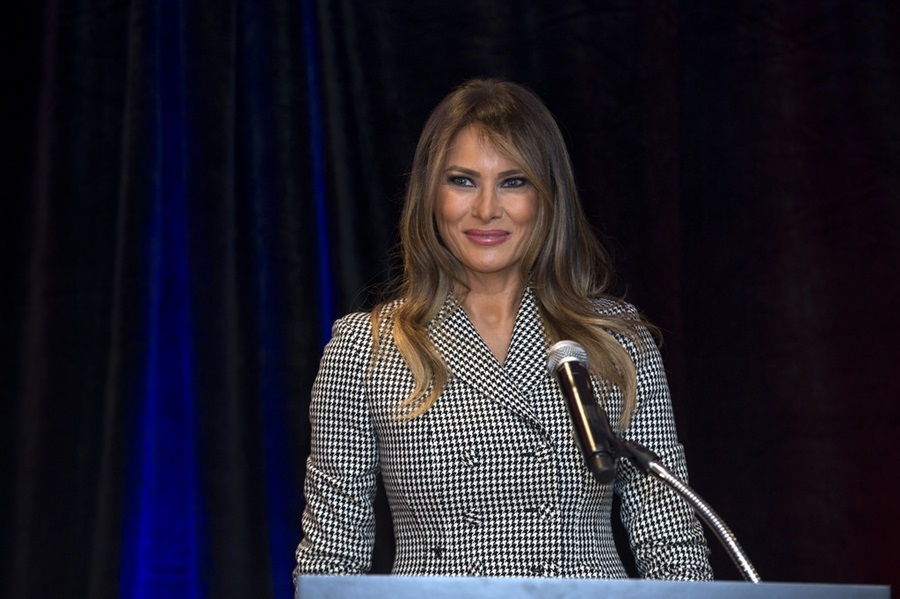 Melania Trump has been under scrutiny ever since her husband, Donald Trump, took the highest political office in the United States. There is a lot of news regarding the current first lady at the moment, from rumors of her having a boob job to a new insight into how she reacted to the POTUS’s controversial video.

Speculations that Melania Trump has gone under the knife started circulating again on the web after the first lady was seen wearing a navy raincoat during the commemoration of the Sept. 11 attacks, Hollywood Life reported. Tweets started going around that the reason for the outfit was to hide the fact that she went for a boob surgery. This isn’t the first time that this rumor was sparked as it took off earlier when the former model was confined at the Walter Reed National Military Medical Center to address a benign kidney condition.

After the surgery, Melania Trump walked out of the medical facility wearing a pale pink tank top and people quickly took notice that her chest was a little bit bigger than it usually is. Speculative narratives then started spreading on multiple social media platforms that the first lady’s illness was actually a front to hide the fact that she had boob implants instead.

People have always painted Melania Trump in a bad light but a recent insight regarding her reaction to Donald Trump’s past actions is slowly gaining positive attention. It can be recalled that prior to being the president, Donald Trump bragged to Billy Bush about grabbing women by their genitals.

Following the leaked footage, Trump’s camp wanted to conduct an interview where it would show Donald Trump with Melania Trump and daughter, Ivanka Trump. According to The Washington Post reporter Bob Woodward, the first lady didn’t want to be part of that particular interview and dismissed the entire idea.

Melania Trump then followed up the rejection with a rebuke, saying that her husband’s actions were “unacceptable” and “offensive” to her. However, she still stands beside Donald Trump and supports the POTUS even though she sometimes disagrees with him.

Besides being the first lady, Melania Trump is also a dedicated mother, waking up early than Donald Trump and ensures her 12-year old Barron is ready for school. What’s more, the former model speaks more languages than her predecessors as she’s adept at English, German, Serbian, Italian, French, and Slovenian.