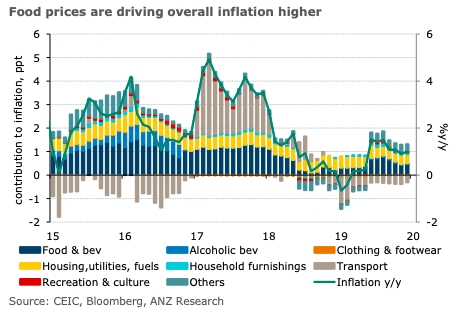 Malaysian inflation is expected to rise in the coming months due to a low bas despite the delay on floating RON95 grade petrol prices, according to the latest report from ANZ Research, after having picked up to 1.0 percent y/y in December on the back of a seasonal uptick in ‘food’ prices.

On a sequential basis, headline inflation in December increased 0.2 percent m/m. A seasonal uptick in ‘food’ prices (0.5 percent m/m), contributed to the bulk of the rise in the overall index. The ‘transport’ and ‘restaurants and hotels’ components also contributed modestly.

On an annual basis ‘transport’ costs contracted 1.9 percent y/y in December, lower than the 2.4 percent y/y contraction in the previous month. Another delay on the shift to floating RON95 grade petrol prices will limit the sequential impact of higher global crude prices in January.

Nonetheless, a low base last year implies that annual growth in the ‘transport’ component will likely turn positive from January, reversing the drag on overall inflation that has persisted for 14 consecutive months.

On an annual basis, core inflation remained unchanged at 1.4 percent y/y in the month. The prospects of a tech cycle upturn and a rebound in public investment spending have made possibilities of a more constructive growth in 2020, the report added.

"Though the floating of RON95 prices has been delayed, low base effects should prop up headline inflation to around the ~1.5 percent mark over the next few months," ANZ Research further commented in the report.