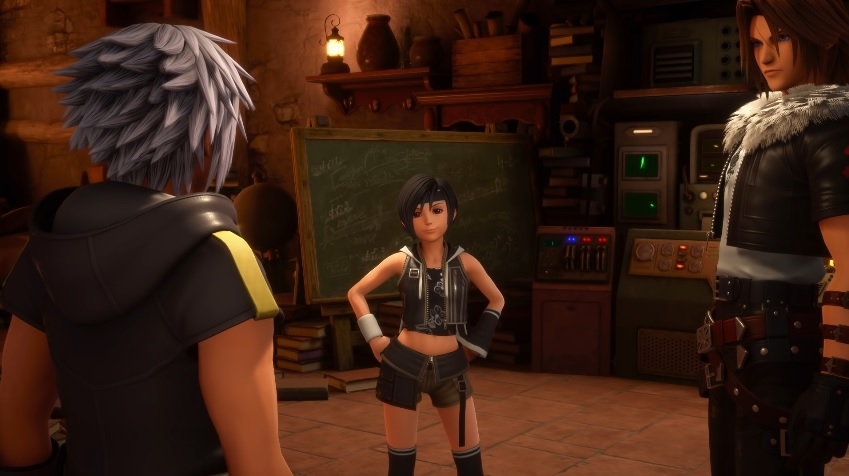 The “Kingdom Hearts 3: ReMind” downloadable content is finally here, and fans will be even more delighted to start playing it once learning that it comes with one more surprise. Aside from the confirmed characters arriving through the DLC, someone is coming back who played a major role in the final series installment.

“Kingdom Hearts 3” and other installments of the series are all very much story-driven, so new players should be warned that there might be major spoilers here. Yozora is one of the biggest surprises when the game launched last year, and it pertains to two things.

First, it is the title of the “Kingdom Hearts 3” secret ending where Sora and Riku are found bewildered while waking up in the game’s version of Shibuya. Riku finds a large building particularly interesting, and he walks past it, a mysterious character is seen watching him secretly – that character is also named Yozora. Eagle-eyed fans may have noticed Yozora appeared earlier in the game’s story campaign as the main protagonist of a fictional video game called “Verum Rex” in the Toy Box world inspired by “Toy Story.”

Sora and Kairi are together again in Re Mind…

But who’s this other person…!? pic.twitter.com/OSjHestj2G

Developers confirm that “Kingdom Hearts 3: ReMind” will once again feature Yozora making him officially a new character with a seemingly important role in the canon story. The official Twitter page of the game made sure fans will keep an eye on Yozora’s return after hinting that Sora and Kairi’s reunion is not the only important part of the DLC as Yozora is also shown in the same location where the two staple characters are.

All these attempts at foreshadowing have led to very plausible speculation. Yozora could be the secret final boss that Sora will face in “Kingdom Hearts 3: ReMind.”

The lineup of characters in “Kingdom Hearts 3: ReMind” is one of the celebrated aspects of the DLC. It can be recalled that there was a controversy in the base game’s launch last year when many fans noticed and complained that many “Final Fantasy” characters were missing.

The release of “Kingdom Hearts 3: ReMind” did not end the debate, though. The DLC has brought back the likes of Axel, Xion, and Roxas. But it only confirmed some fans’ previous comments that the fan-favorite characters would be locked behind a paywall.