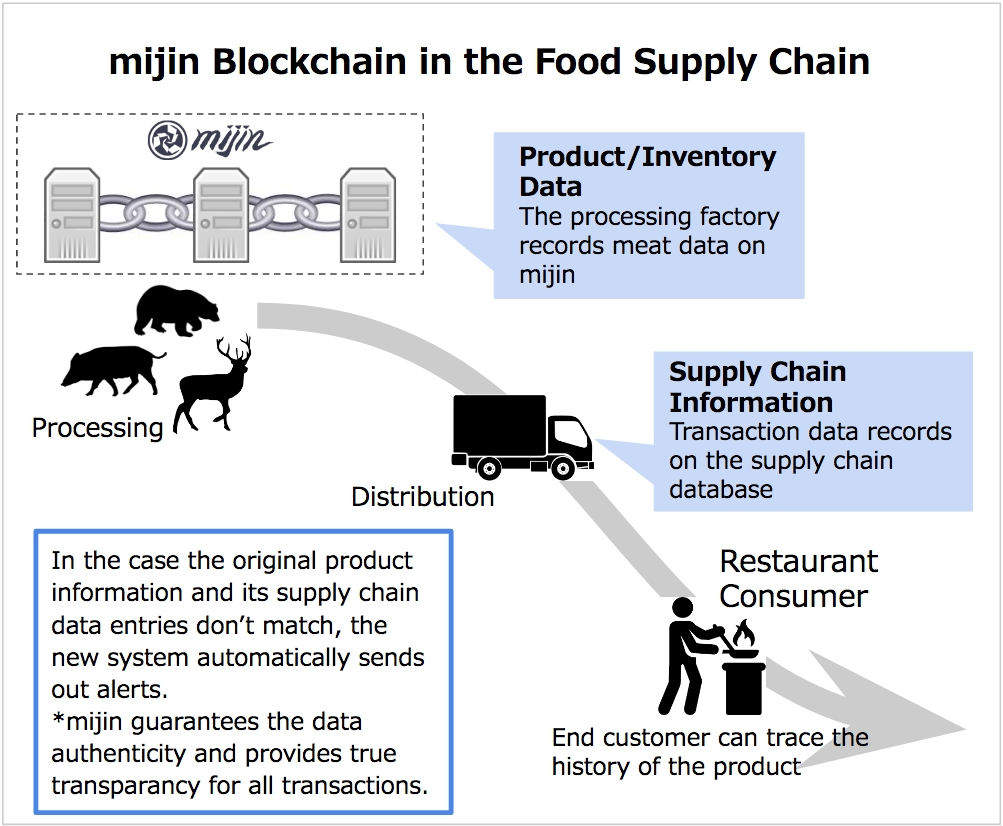 Tech Bureau, a fintech and cryptocurrency solutions company headquartered in Osaka, has announced a first blockchain use case for a division of the Japanese Ministry of Agriculture, Forestry and Fisheries.

Japan Gibier Promotion Association, an agency responsible for the culinary culture and culinary distribution in Japan, is seeking a secure supply chain solution to comply with Japanese distribution standards for wild game meat. The objective is to build a safe supply chain and distribution channel to ensure quality food for public health.

Japan Gibier Promotion Association needs to record the meat supply chain data, from the hunting ground to the restaurant. By using the mijin blockchain, it will determine whether data (date, transit point, manager, item name, amount, price, etc) from the game meat processing factory is properly recorded on the blockchain in a visible and verifiable way, and whether the alert system designed for automatic detection of falsified data is complete.

Once the data from the processing factory is recorded on the mijin blockchain, it cannot be tampered with and will serve as benchmark to match data in the traditional supply chain. In case the entries don’t match, the new system automatically sends out alerts. In this way, the new system will help to create a transparent and traceable supply chain to monitor game meat, guaranteeing the highest quality control of the product.

“Some rural communities suffer from wildlife overpopulation, amounting to over 178m USD per year. The power of blockchain technology is that it can transform one of the oldest food supplies into an asset for local communities,” said Takao Asayama, CEO of Tech Bureau, Corp.

According to the official release, the association will start deployment in October and eventually roll out the new system across the country.

In August 2017, Tech Bureau announced “COMSA”, a complete ICO fundraising platform is built on the NEM protocol meant for the streamlining of cryptocurrency funding. COMSA kicked off its ICO on October 2 and has raised over $65 million so far.