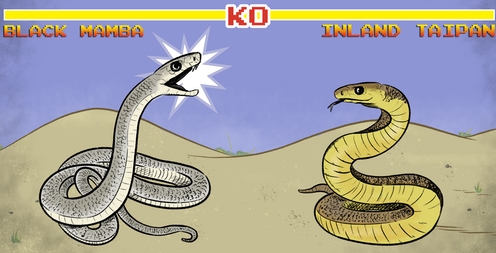 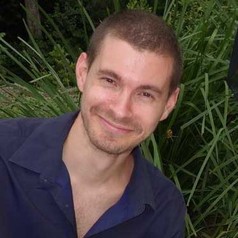 Who would win in a fight between the Black Mamba and the Inland Taipan? – Biswajit Tripathy

What a fascinating question!

Before we start talking about the fight, we first need to think about why these two snakes got into the dust-up. Despite what many people think, snakes are generally very shy and cautious animals that will do their very best to avoid trouble.

This is sensible – why take the risk of getting hurt if you can avoid it?

Having said that, there are two main reasons why snakes get into fights with other snakes. During the breeding season, male snakes sometimes fight other male snakes of the same species. 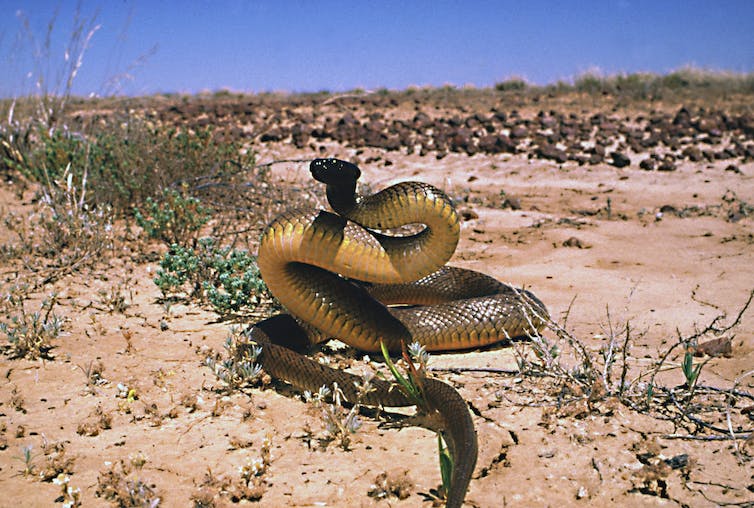 We might think of this as a way of impressing the girls – not a good reason for a fight between two humans, but it seems to work for snakes. Because black mambas and inland taipans are two different species, though, we can rule out this reason for their biff.

The most likely reason for our showdown is that one snake is trying to eat the other.

A serving of snake might not seem very appetising to us, but a smaller snake is actually a very nice meal for a larger snake. Some species of snakes, like the king cobra, even specialise in eating other snakes - they are extremely fussy about their food and turn their noses up at almost any other meal.

Black mambas normally eat mammals and birds, and inland taipans almost exclusively eat mammals like rats and mice, but most snakes will take advantage of an easy meal if it presents itself.

Before we get to the fun bit, we should note that black mambas are from Africa and inland taipans are from Australia. This means under natural circumstances, the two species would never meet.

In fact, black mambas and inland taipans are like the “alpha” snakes of Africa and Australia. They’re the top dogs of their turf and, once they become adult snakes, there aren’t too many other animals that want to tangle with them.

The stage is set, the combatants have entered the ring, there can be only one winner. Which will it be?

Snakes have two main ways of fighting: they can wrestle and they can bite. When boy snakes fight to impress the girls, they usually just wrestle, wrapping around and around each other to see who’s strongest, as each tries to pin his opponent’s head to the ground.

When snakes fight because one thinks the other would make a yummy snake snack, they fight dirty, by any means necessary, both wrestling and biting. Black mambas and inland taipans are both famously venomous, so their bites pack a serious punch!

But which venom is the more powerful weapon? Which one will give its owner the edge?

Taipan venom is extremely strong – it’s the most powerful snake venom there is, at least against mice. Black mamba venom, on the other hand, is extremely fast-acting.

We have good reason to believe taipan venom is specially designed for taking down rats as quickly as possible. But the way they do that – by interfering with the rat’s blood – probably won’t work well against the mamba.

Black mamba venom is designed for rapidly taking down birds as well as mammals, and this turns out to be an important point. If you’ve seen Jurassic Park (if you haven’t, stop whatever you’re doing and see it immediately!) you know birds are descended from dinosaurs.

In fact, even though birds have feathers and (usually) fly, they’re actually just a special group of reptiles. Birds are more closely related to crocodiles than crocodiles are to lizards! This means that a venom that works well against birds probably works well against most other reptiles, including snakes.

The mamba has the edge when it comes to venom – watch out, inland taipan!

Wrestling is important too. And although mambas can grow very long and are very fast, taipans have more muscle and are probably stronger.

If the taipan was very careful not to get bitten during the scuffle, there’s a good chance it could overpower the mamba – watch out, black mamba!

Sizing up the opponent

These species are closely matched, each with their own special weapon they could use to win the fight. Remember, the reason these snakes are fighting is because one wants to eat the other, and only a silly snake – one with eyes bigger than its stomach – would try to eat a snake bigger than itself.

So who would win?

Although both species are highly venomous and each of their venoms is beautifully designed for subduing their natural prey, the biological reality is that the winner would probably be whichever snake was bigger on the day, regardless of species.

This is an important lesson for us about snakes – despite their impressively toxic venoms, they generally do not like to pick fights with animals that are much bigger than they are.

Since we humans are a lot bigger than snakes, they’d much prefer to hide from us and get out of our way as fast as possible. If we leave snakes alone, they will leave us alone – look, but don’t touch!

Even though our fantasy fight between the black mamba and inland taipan might never happen in reality, this was a great question because it made us think about snake biology, from behaviour to venom, in a fun way. Using our imagination to learn about the natural world is never a bad thing.