HIV/AIDS Cure 2019: Human trials begin soon for HIV vaccine in the works for over 30 years 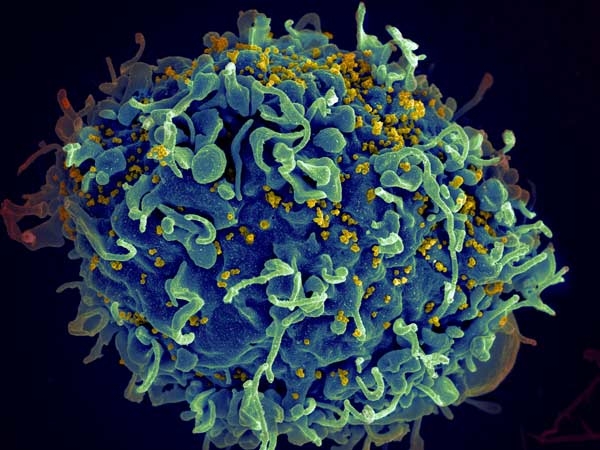 This human T cell (blue) is under attack by HIV (yellow), the virus that causes AIDS. | Photo by National Institutes of Health (Public Domain) via Flickr.com

Several significant developments in the field of HIV/AIDS cure studies have been reported this year. Now, adding to that is an HIV vaccine entering human trials after it has been in development for more than 30 years.

The said vaccine is being developed under the efforts of pharmaceutical giant Johnson & Johnson and will undergo human testing before 2019 ends. The trials will take place in the United States and across Europe with around 3,800 male subjects who have sexual intercourse with men.

The report was confirmed by Bloomberg through the statements of the U.S. National Institute of Allergy and Infectious Diseases director Anthony Fauci. J&J and Fauci’s agency will partner with the HIV Vaccine Trials Network to push through with the testing. Parties involved reportedly expect to see results in a matter of four years or sometime in 2023.

Human trials are said to be carried out in four batches. In each session, every patient will be given six doses of the vaccine.

The said HIV vaccine was previously tested on animals and researchers saw promising results after reportedly killing the virus for the first time on mice subjects. The procedure was successful once the scientists combined CRISPR-Cas9 or CRISPR with a type of antiretroviral treatment.

Researchers used “humanized” mice subjects infected with HIV for the animal testing of the vaccine. The treatment employs the combination of long-acting slow-effective release (LASER) ART and gene-editing tool CRISPR. In the study’s publication in Nature Communications, the researchers report seeing “viral clearance” after administering vaccines with LASER ART and CRISPR. But when used separately, the virus remained undetectable on the human-model mouse subjects.

With the lack of cure and prevention measures that need to be improved around the world, HIV/AIDS remains a global epidemic. As of 2018, the UNAIDS reports 37.9 million people are living with HIV. Of the 37.7 million patients, over 36 million are adults, and the rest are children.

The more pressing issue from those figures is the fact that only 23.3 million people have access to ART therapy. The data also show the need to improve HIV testing drives in various regions as more than 8 million patients did not initially know of their status.