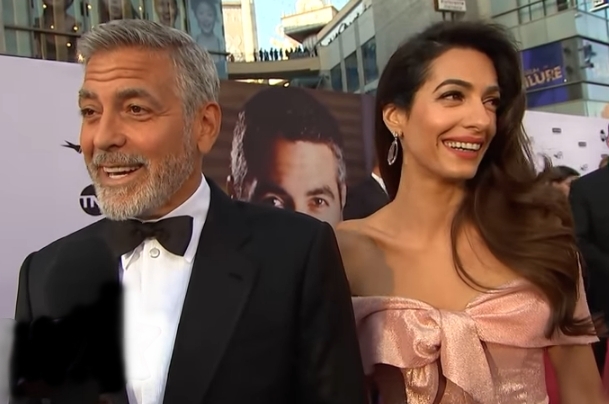 George Clooney and Amal Alamuddin are allegedly having marriage troubles and their issue is getting deeper as days pass by. In fact, recently, it was said that the couple had an ugly fight again that the latter fled their home and met up with one of her closest friends, model Cindy Crawford.

According to Radar Online, on Jan. 31, Amal Alamuddin and Cindy grabbed dinner together and had a fun ladies’ night in Studio City in Los Angeles. Deep into the night, the human rights lawyer allegedly revealed hers and George Clooney’s marriage woes to the model.

“George and Amal have been arguing over their varying lifestyles and rumors of a rift have been going on around for months,” the source told Radar. “She is all business, he is all play. They are like oil and water, they just don’t mix.”

The supposed insider further suggested that George Clooney and Amal Alamuddin are also likely to be talking about child custody of their 1-year-old twins – Ella and Alexander, soon. The couple was already rumored to be involved in a $520 million divorce case but this was not confirmed.

Gossip Cop steps in to check the facts to determine if the Radar report is true or false. In the end, it found that there is no truth in the story because no proof was presented aside from unverified photos that Amal Alamuddin and Cindy Crawford were together on one occasion.

Moreover, the publication pointed out that this is not the first time that the magazine wrote a fabricated story about George Clooney and Amal Alamuddin. Thus, sometimes it cannot be trusted for its reports on celebrities. Radar was also the one that reported about the pair’s multi-million divorce case but this was not proven and no reputable media outlet wrote the story, indicating that it is a suspicious narrative.

George Clooney and Amal Alamuddin are enjoying a sound marriage right now so their relationship status is far from what the tabloids say. The pair was also spotted holding hands and smiling at a United Nations’ event last December and this is not something that a divorcing couple would do, right?