FxWirePro: US Election Outlook - Luring Opportunities For Adding Longs In 3M USD-Correlations Ahead of US Polls 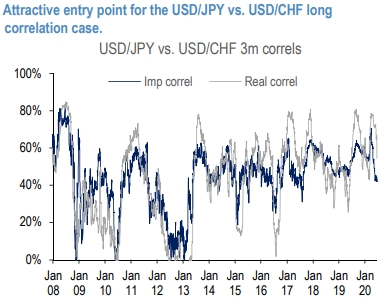 From most likely set to win a second presidential term at the start of the year, Donald Trump’s chances of re-election have taken a considerable blow in recent times. Especially, the coronavirus pandemic has ushered in the most serious economic recession.

White House adviser Peter Navarro spooked markets with his comment that the US-China trade deal was over; US stock market futures fell and the USD rose. Markets reversed course after US President Donald Trump said that the deal was “fully intact”. US Treasury Secretary Steve Mnuchin expects China will live up to its trade deal with the US. Amidst the worst US recession and jobs market since the Great Depression, President Trump would not want the US equities to weaken ahead of the November elections.

Despite the above efforts to assuage trade worries, the Dow has, for the fourth time in six sessions, failed to close above its 200-day moving average, last around 26300. Why? At the start of the year, investors were also wary that US equities have become expensive relative to US fundamentals. After the Phase 1 trade deal in mid-January, US elections overtook trade tensions as the top threat to the market. Presently, polls have shifted dramatically against President Trump in favor of Democratic presidential candidate Joe Biden. The coronavirus and the George Floyd racial protests have turned the US elections into a referendum on President Trump. When the 2018 mid-term elections became a referendum on Trump, the Republicans lost the lower house. Not surprisingly, the Democrats are now seen taking control of the Senate too.

It has been clear from the market volatility perspective on Tuesday morning that the US-China trade tensions have not been brushed aside as initially thought.

The USDJPY vs USDCHF case offers a clean exposure to the two possible drivers listed above, with pricing of riskies confirming the safe-haven nature of both JPY and CHF vs. USD, and benefits from benign pricing on the back of low implied correlations. For the EUR vs JPY case, current pricing of front-dated EURUSD riskies (back to negative, after venturing into positive territory over the past few weeks) would not favour the spike of realized correlations in a risk-off market (the interplay between pricing of riskies and that of correlations was investigated in a recent piece), while preserving exposure to large USD moves around US elections. The time series of 3m implied/realized correlations for USDJPY vs. USDCHF (refer 1st chart) confirms the attractive entry point for the trade. Spikes in realized correlations tend to occur towards higher (than lower) levels, especially over past 7-yrs, and current implied is near 3-yr lows. For USDEUR vs. USDJPY, the picture is similar with lower correlation levels.

The above analysis looked at spot 3M implied correlation (from ATM vols) vs. 3M realized correlation. For playing a tactical rebound of correlation levels near the US election, one might be interested in bypassing the (possibly?) less eventful summer period and consider forward correlation plays. One can get a proxy value of such forward correlations by closing the triangles via forward volatility (FVAs) rather than spot ATM vols. Forward correlations extracted from forward vols (refer 2nd chart) are remarkably higher than the corresponding spot correls for the same expiry, but as discussed should permit isolating better the specific early November US risk event. The comparison with the long-term distribution properties of 3m realized correl gives support to the long-correlation ideas for both triplets.

Given the already dry liquidity of (spot) correlation swaps, one could proxy the forward correlation play via an RV of two FVAs, with equal Vega notionals (for a more ambitious three-legged FVA replication, one could have used same Vega notionals as for the spot corr swap). The negative carry associated with the structure makes opt for a simpler, spot structure to be included within our portfolio. For the EUR vs. JPY case, we opt for an outright dual-digi trade on the back of the higher correlation discount, given a lower implied level.

We flag three possible ways of taking advantage of this setup: