Are You Caught-Up Between Two Stools To Decode White House’s Budget-2021 Proposal? 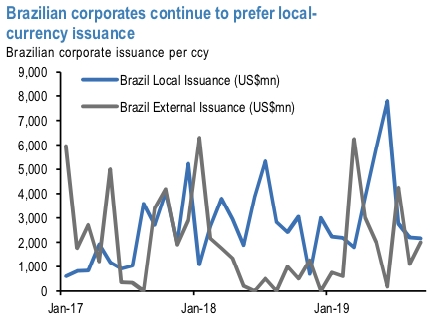 LatAm currencies fought back against the idea that weaker global growth should cause them to weaken, and additional market pricing of Fed rate cuts undermined the broader USD and supported Latam currencies. Their rally was most likely exacerbated by investors’ light positioning in Latam currencies, as shown from CLP (typically a funding currency) outperforming MXN (which investors are net long according to CFTC data). Still, we do not such EMFX strength to last for much longer, particularly since next week market participants are likely to shift their attention back to China-US trade relations and the possibility of a “soft deal”.

As such, we maintain our Neutral Latam FX position, via OW BRL and COP, and UW MXN. In outright trades, we maintain our long BRL position via option structures, and a long PEN/CLP targeting 225.

Staying long as expected inflows from the oil reserve auctions should have a larger impact than SSR adjustments. The saga of the social security reform continues, and market participants were disappointed to find out that not only has the Senate passed an amendment that dilutes expected savings in the coming decade, but that the Senate has chosen to postpone its 2nd vote to October 22nd.

Nevertheless, portfolio flows and foreign positions should become less sensitive to these headlines, and increasingly focused on the Government’s privatization agenda and the possibility of foreign O&G firms buying BRL in order to participate in the excess oil auction due on November 6th.

For now, weekly financial outflows continue to be the norm according to BCB data, and we remain aware that local corporates continue to prefer local-currency issuance over external: in fact, they continue to issue more in local currency, and have made additional USD-debt tenders for $2.6bn in September (refer above chart). Hence, we continue to recommend USDp/BRLc 1x2 option structures (K=4/4.20). Courtesy: JPM