FxWirePro: Take a Glance at Driving Forces of EUR Shorts Against JPY and CHF 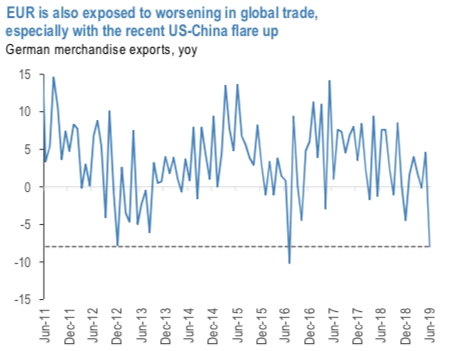 We have been recommending short EUR in recent months predicated largely on continuing underperformance in the domestic economy, even despite EUR showing somewhat less sensitive to data in recent months (the recent softening in Euro area growth has come amid a simultaneous weakening in the rest of the world, which has limited the impact on EUR, in our view).

Developments this week, including an outright contraction in IP data across key Eurozone economies, reinforce our view that poor cyclical should now weigh more heavily on the currency given strong signaling of upcoming easing from the ECB later this year. For that reason, we refer to JP Morgan’s projections which seem to have been revised down to 1.10 for 4Q'19 and 1.13 by 2Q'20 intra-week (Marking down EURUSD forecasts).

Similarly, pronounced data out of Germany this week continue to suggest that there is little in the way of a near-term inflection point in the data, especially with the US-China trade spat risking further worsening of global trade outcomes and weighing on global growth more generally (refer above chart).

Thus, central bank easing should remain a durable theme for EUR as data continues to print comparatively poor data versus global peers, and with ample scope for further downside compared to prior easing episodes given that positioning remains close to neutral. Furthermore, developments in Italy leave some scope for EUR-negative tension leading up to elections (possibly in October), but the overall impact of Italian politics should be limited and potentially market-friendly further down the road. But for the near-term, this adds incremental fodder to stay short EUR.

We express shorts vs. CHF and JPY where the central bank easing is not in play in the way it is for the ECB. We remain neutral on EURUSD as Fed easing is still on the cards and will likely continue to be revised alongside swings in market risk sentiment—poor risk sentiment/ weaker global growth could actually result in a stronger EURUSD given that the Fed has more room to ease relative to the ECB.

While Italian political developments could present some near-term headline risk to EUR, we think the outcome of an election (now a high probability event) is eventually likely to be market-friendly with either center-right (Lega+FI+BoI) or right (Lega+BoI) coalition, a change from the current left-right populist government.

We have been recommending bearish euro exposure vs CHF and JPY motivated by expectations of ECB easing and poor regional growth dynamics. These continue to be the primary reasons for our bearish EUR view. Even though it is our assessment that the eventual impact on the euro from recent Italian political developments is likely to be contained, any near-term impact, if any, is likely to be EUR-bearish in any case while Italian politics does not derail QE-friendly portfolio.

Stay short EURJPY in cash. Marked at +3.49%, also be noted that we’ve advocated shorts in futures contracts of mid-month tenors with a view to arresting potential dips. since further price dips are foreseen we would like to uphold the same strategy by rolling over these contracts for September month deliveries. Courtesy: JPM