FxWirePro: EUR/NZD struggle to extend its gains,good to sell on rally

FxWirePro: AUD/USD opens the week on a bearish note, breach below 200-week MA to plummet prices

FxWirePro: EUR/AUD close below key fibo adds to the bearish bias, good to sell on rally 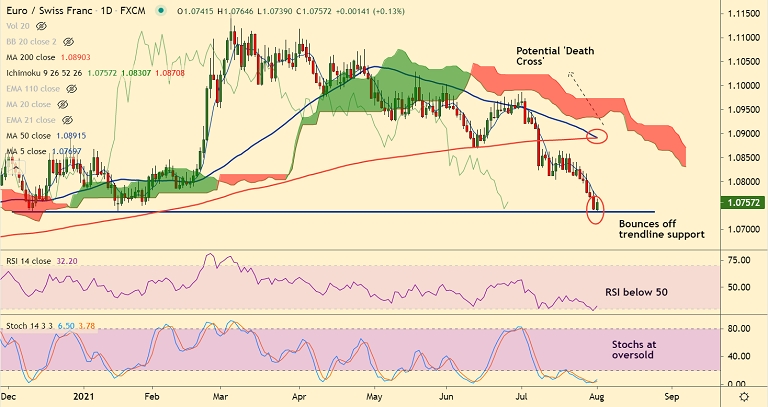 The pair has paused 5-day bearish streak and has edged higher after upbeat German retail sales and eurozone PMI data support the euro.

German retail sales rose 4.2% on the month in real terms after an upwardly revised jump of 4.6% in May, beating forecasts at 2.0% by a large margin.

According to the latest data released by Markit, eurozone July final manufacturing PMI printed at 62.8 vs 62.6 in the preliminary reading.

The single currency buoyed after upbeat data. Price action has bounced off major trendline support at 1.0740.

Technical bias is strongly bearish, but oversold oscillators might cause some retrace in price from lows.

Break below trendline support will plummet prices. Next major bear target lies at 88.6% Fib at 1.0716.