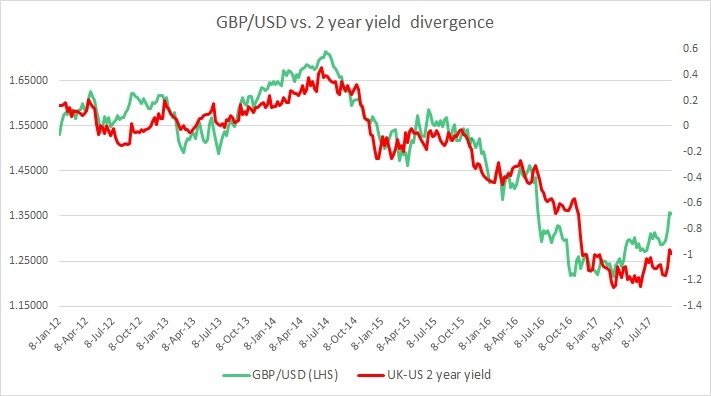 The chart above shows, how the relationship between GBP/USD and 2-year yield divergence has unfolded since 2012.

The cosy relationship between the yield spread and the exchange rate, in this case, is quite visible. Back in 2013/14, UK’s economic prowess and the disappointment that the Bank of England (BoE) governor Mark Carney wasn’t as dovish as expected, fuelled the increase in yield divergence in favour of the United Kingdom and strengthening of the pound against the dollar. But as economic growth slowed and the BoE expressed a greater desire for a cautious approach, yield spread (UK-US) declined and exchange rate softened.

A week before the referendum the yield spread between 2-year gilt and the 2-year treasury was trading at -0.36 percent and after it, the decline was very sharp. By October, It declined to -0.65 percent. And the pound has declined from 1.36 against the dollar to 1.25 against the dollar as Bank of England (BoE) introduced several accommodative monetary policy measures including a rate cut. Since the US election that was won by Donald Trump, the yield spread deteriorated sharply to -1 percent.

As a matter of fact, the pound has actually risen since the election. Back in November last year, the pound was trading around 1.235, while the yield spread was at -87 basis points. While the spread widened further towards -121 basis points, the pound is up trading at 1.272 against the dollar.

Since our last review in August, the spread has somewhat narrowed in favour of the pound as the Bank of England (BoE) gave out a rare signal of a looming rate hike. The spread has narrowed by almost 10 basis points, and currently at -99 basis points (UK-US). However, the pound has moved faster, which is not unusual and has increased by almost 690 pips since our review in August and is currently trading at 1.356 against the dollar.