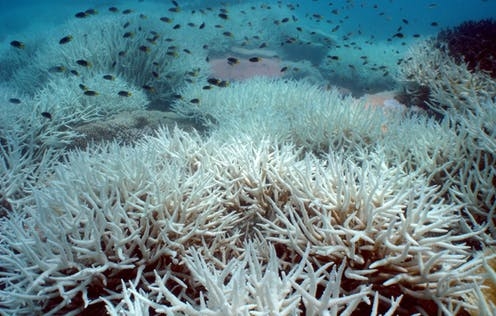 Bleached staghorn coral on the Great Barrier Reef. Many species are dependent on corals for food and shelter. Damian Thomson, Author provided 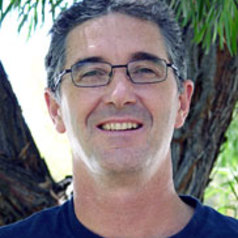 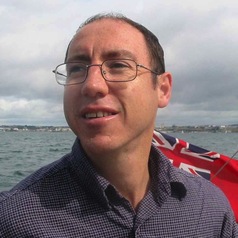 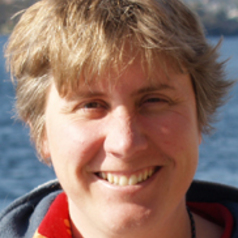 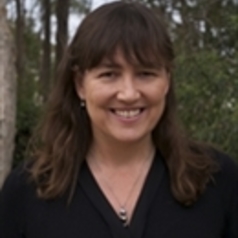 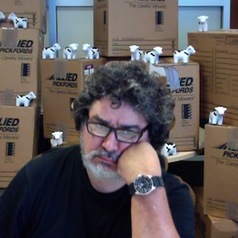 If you think climate change is only gradually affecting our natural systems, think again.

Our research, published yesterday in Frontiers in Marine Science, looked at the large-scale impacts of a series of extreme climate events on coastal marine habitats around Australia.

We found more than 45% of the coastline was already affected by extreme weather events caused by climate change. What’s more, these ecosystems are struggling to recover as extreme events are expected to get worse.

There is growing scientific evidence that heatwaves, floods, droughts and cyclones are increasing in frequency and intensity, and that this is caused by climate change.

Life on the coastline

Corals, seagrass, mangroves and kelp are some of the key habitat-forming species of our coastline, as they all support a host of marine invertebrates, fish, sea turtles and marine mammals.

Our team decided to look at the cumulative impacts of recently reported extreme climate events on marine habitats around Australia. We reviewed the period between 2011 and 2017 and found these events have had devastating impacts on key marine habitats.

Healthy kelp (left) in Western Australia is an important part of the food chain but it is vulnerable to even small changes in temperature and particularly slow to recover from disturbances such as the marine heatwave of 2011. Even small patches or gaps (right) where kelp has died can take many years to recover. Russ Babcock, Author provided

These include kelp and mangrove forests, seagrass meadows, and coral reefs, some of which have not yet recovered, and may never do so. These findings paint a bleak picture, underscoring the need for urgent action.

During this period, which spanned both El Niño and La Niña conditions, scientists around Australia reported the following events:

2011: The most extreme marine heatwave ever occurred off the west coast of Australia. Temperatures were as much as 2-4℃ above average for extended periods and there was coral bleaching along more than 1,000km of coast and loss of kelp forest along hundreds of kilometres.

Seagrasses in Shark Bay and along the entire east coast of Queensland were also severely affected by extreme flooding and cyclones. The loss of seagrasses in Queensland may have led to a spike in deaths of turtles and dugongs.

2013: Extensive coral bleaching took place along more than 300km of the Pilbara coast of northwestern Australia.

2016: The most extreme coral bleaching ever recorded on the Great Barrier Reef affected more than 1,000km of the northern Great Barrier Reef. Mangrove forests across northern Australia were killed by a combination of drought, heat and abnormally low sea levels along the coast of the Gulf of Carpentaria across the Northern Territory and into Western Australia.

Many of the impacted areas are globally significant for their size and biodiversity, and because until now they have been relatively undisturbed by climate change. Some of the areas affected are also World Heritage Areas (Great Barrier Reef, Shark Bay, Ningaloo Coast).

Seagrass meadows in Shark Bay are among the world’s most lush and extensive and help lock large amounts of carbon into sediments. The left image shows healthy seagrass but the right image shows damage from extreme climate events in 2011. Mat Vanderklift, Author provided

The habitats affected are “foundational”: they provide food and shelter to a huge range of species. Many of the animals affected – such as large fish and turtles – support commercial industries such as tourism and fishing, as well as being culturally important to Australians.

Recovery across these impacted habitats has begun, but it’s likely some areas will never return to their previous condition.

We have used ecosystem models to evaluate the likely long-term outcomes from extreme climate events predicted to become more frequent and more intense.

This work suggests that even in places where recovery starts, the average time for full recovery may be around 15 years. Large slow-growing species such as sharks and dugongs could take even longer, up to 60 years.

But extreme climate events are predicted to occur less than 15 years apart. This will result in a step-by-step decline in the condition of these ecosystems, as it leaves too little time between events for full recovery.

This already appears to be happening with the corals of the Great Barrier Reef.

Gradual decline as things get warmer

Damage from extreme climate events occurs on top of more gradual changes driven by increases in average temperature, such as loss of kelp forests on the southeast coasts of Australia due to the spread of sea urchins and tropical grazing fish species.

Ultimately, we need to slow down and stop the heating of our planet due to the release of greenhouse gases. But even with immediate and effective emissions reduction, the planet will remain warmer, and extreme climatic events more prevalent, for decades to come.

Recovery might still be possible, but we need to know more about recovery rates and what factors promote recovery. This information will allow us to give the ecosystems a helping hand through active restoration and rehabilitation efforts.

We will need new ways to help ecosystems function and to deliver the services that we all depend on. This will likely include decreasing (or ideally, stopping) direct human impacts, and actively assisting recovery and restoring damaged ecosystems.

Several such programs are active around Australia and internationally, attempting to boost the ability of corals, seagrass, mangroves and kelp to recover.

But they will need to be massively scaled up to be effective in the context of the large scale disturbances seen in this decade.

Mangroves at the Flinders River near Karumba in the Gulf of Carpentaria. The healthy mangrove forest (left) is near the river while the dead mangroves (right) are at higher levels where they were much more stressed by conditions in 2016. Some small surviving mangroves are seen beginning to recover by 2017. Robert Kenyon, Author provided