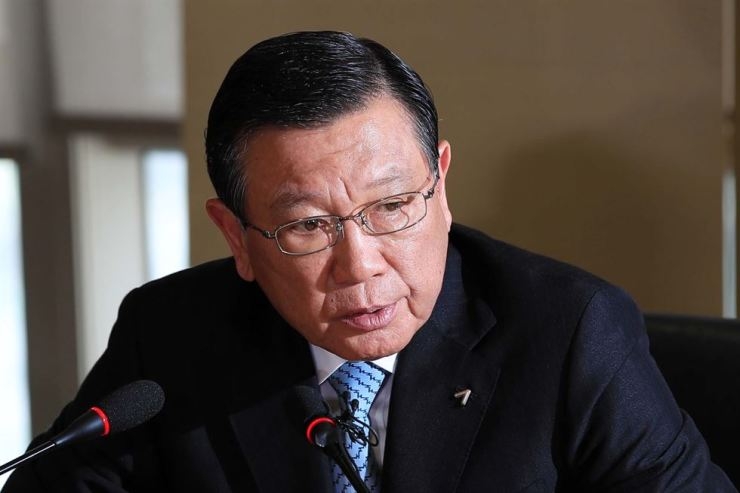 The Seoul Central District Court approved the prosecution's request to put the former chairman of Kumho Asiana Group, Park Sam-koo under pre-trial detention after questioning him on charges of masterminding unfair financial transactions among group affiliates.

The 76-year-old Park allegedly made huge gains from the transactions.

He was arrested on Thursday.

Park was then charged for mobilizing Asiana Airlines and other group companies to support Kumho Buslines, which was controlled by him and his family.

Park resigned as chairman of Kumho Asiana Group and its affiliate Asiana Airlines in 2019 due to the controversial bookkeeping for the nation's No. 2 carrier.

Gategroup subsequently acquired 160 billion won worth of bonds with warrants issued by Kumho Buslines with a zero rate of interest. The Kumho company earned 16.2 billion won in the said transaction, according to the antitrust watchdog Korea Fair Trade Commission (KFTC),

Nine group companies, including Kumho Industrial Co., also lent 130.6 billion won in 45 installments to Kumho Buslines without security and at an interest rate of 1.5 to 4.5 percent, which was lower than the normal 3.49 to 5.75 percent interest rate.

The KFTC concluded that Kumho Buslines gained 16.9 billion won from the interest rate gaps, with Park and his family pocketing at least 7.7 billion won in profits and 250 million won in dividends.

The KFTC has imposed a 32 billion won fine on the group and reported Park and two group executives to the prosecution for criminal investigations.