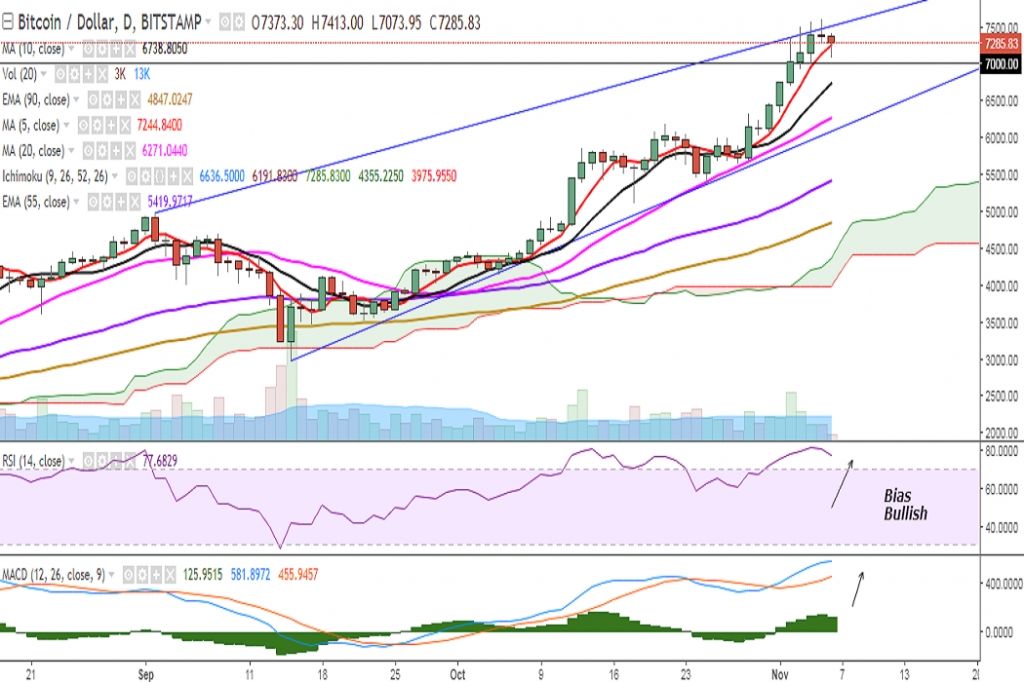 Bitcoin price skyrocketed last week from around 6000 levels to near 7600 levels (Bitstamp).

While the cryptocurrency community is rejoicing the new heights, skeptics are calling this as a bubble. Digital currency industry experts believe that recent surge in bitcoin price is being driven by growing awareness among people and businesses.

"The recent price run-up in bitcoin can be attributed to many factors, but one of them is surely the growing awareness among businesses of the value of bitcoin in cross border transactions,” William Quigley, CEO of WAX. “Bitcoin seems pricey at $7,000 only to those who have not yet discovered the power of a global, immutable digital currency. Bitcoin at $100. Too expensive! Bitcoin at $1,000. Outrageous! Bitcoin at $7,000. It’s a bubble! They never learn. Bitcoin is unstoppable.”

“We aren't at all surprised about Bitcoin crossing $7000. The fact is there is a finite amount of Bitcoin in the world, the transactions are open and transparent, it's just a much better trading commodity than paper gold - and more convenient than Fiat currency. People should not be surprised by this move, they should try to understand it before dismissing it,” Rahul Sood, CEO of Unikrn, said.

Experts also believe that the growth in bitcoin price represents the success of the underlying blockchain technology.

“Bitcoin marked the beginning of blockchain technology, and the community has built it into a global, decentralized economic revolution. Bitcoin reaching new heights signifies that the blockchain industry is making great strides,” Assaf Ben-Or, CEO of Greeneum, said.

“Bitcoin has proven time and time again to be resilient. As the leading principal blockchain project has demonstrated, not only does blockchain technology work, but it’s growing exponentially. While we are also seeing great growth and diversification in blockchain products and specialization, especially with projects like Ethereum and NEM, Bitcoin is not only remaining relevant but is doing a great job of staying dominant in the area of blockchain as a money service,” Jeff McDonald, Vice President of the NEM Foundation, said.

“Bitcoin reaching an all time high illustrates that the blockchain industry is continuing to grow and at a record pace,” Jordan Earls, Co-Founder of Qtum and Co-Chair of the Smart Contracts Alliance.

Arman Agaronyan, Partner Manager, Investor of Spinbackup, expects further growth in bitcoin price, but called for caution while considering investments in the cryptocurrency.

“Bitcoin is now well over $7,000, and I think that this number will continue going up quickly as long as there is all this hype around Bitcoin. You have ordinary people wanting easy and passive income, so they are investing a lot of money into Bitcoin, regardless if they understand the technology or not. This is truly something unique, but we believe that once the hype ends, the price will go down to something more realistic, the thing is that no one really knows when that time will come,” Agaronyan said. “Of course on the other hand, I believe that Bitcoin is absolutely legitimate, as there are countries like Japan and companies like Expedia accepting it as payment now.”

“If you consider buying Bitcoin, understand that this is a high-risk and high-reward investment. If you want to diversify your portfolio, then consider putting a small part of it into Bitcoin and see what happens. Personally, I think of collecting Bitcoins sort of like collecting art or baseball cards. It may be worth a huge fortune one day, even bigger than now, but you should always be prepared to never see the money that you invested ever again.”