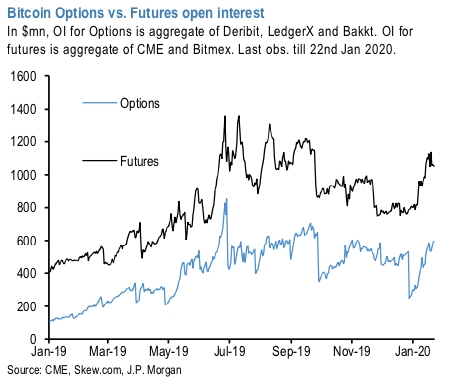 As we noted a few weeks ago, the CME launched bitcoin options contracts based on the underlying CME cash-settled futures contracts. While this was not the first bitcoin option contract, as there are already option contracts actively traded at Derebit and LedgerX as well as the ICE/Bakkt options contracts that settle into the underlying physically-delivered monthly futures contract launched on Dec 9th, this launch had been widely anticipated given the dominance of CME in trading bitcoin futures in regulated exchanges.

Since the CME’s bitcoin options contracts were launched on Jan 13th, the open interest has risen to above $10mn according to data from skew.com, well above the peak thus far of the previously listed ICE/Bakkt options just over $1mn.

For options, by contrast, there is less reason to expect such a divergence to persist, as margins are not used in the same way to gain leverage as for futures. Also, some hedge funds who do not necessarily have a fundamental view on bitcoin direction could see opportunities in trading volatility. The CME’s reputation and credibility in US derivatives markets more broadly could be a substantial advantage in attracting those potential market participants.

Derivatives instruments are basically meant for hedging but used to speculate on the price of an underlying asset. Traders can anticipate to what changes would be on the price of a given asset in the future. Owing to the forecasts, at times the crypto price does not tend to move in line with the market developments because it drives on predictions but these derivatives products assist in price discovery. The projections enable more yields on the financial contracts, hence, generating room for manipulation by sceptic traders who deliberately hike asset prices. Courtesy: JPM