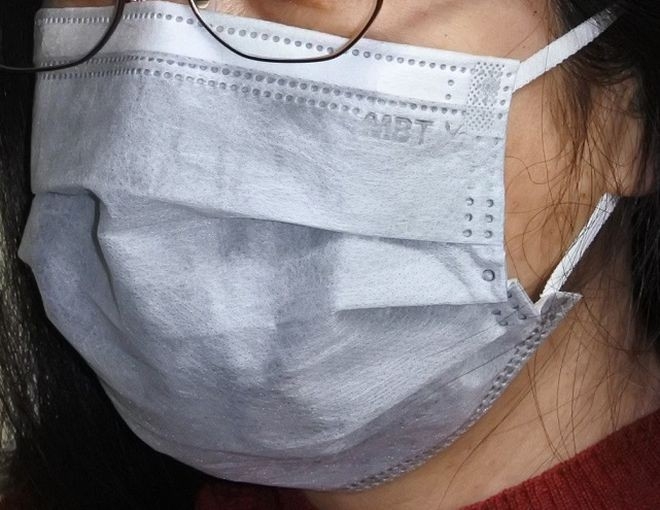 The surgical mask, a brainchild with an exceptional antivirus performance made its debut on Feb. 1, recognized as meeting the Japanese Industrial Standards (JIS).

Nara Medical University and a coating technology company Yamato Shinku-Kougyo Co. have collaborated to produce a nonwoven mask specially treated with a copper alloy to protect wearers from the novel coronavirus.

The developers say their facial gear can quickly render viruses on the covering inactive.

Kazumi Iwamoto, 42, a senior managing director at Yamato Shinku-Kougyo, said they expect ordinary consumers, including those who cannot be vaccinated for some reason, as well as medical workers, to use their products.

The surgical mask, a brainchild with an exceptional antivirus performance made its debut on Feb. 1, recognized as meeting the Japanese Industrial Standards (JIS).

In June of last year, the university's Department of Microbiology and Infectious Diseases suggested that Yamato Shinku-Kougyo, a painting and coating processing firm for resin mold goods, develop a product utilizing a copper alloy to reduce viral infectivity.

Yamato Shinku-Kougyo sprayed an alloy primarily composed of copper on the second layer from the surface using a unique technique called vapor deposition to form a thin membrane across the entire surface.

Copper ions are known to be able to damage the new coronavirus, according to Ryuichi Nakano, an associate professor of microbiology at the university.

Nakano had tested the product against the Delta variant of the virus that he helped culture.

During the test, the virus was reduced to one-millionth of its initial quantity in two minutes. Nakano was amazed to observe that the virus variant became disabled to the point that it fell below detection levels.

Nakamo said he did not predict they could achieve such a high antivirus effect, adding that it would likely have the same effect on the Omicron variant.

It was exhibited in the JIS screening last fall that the copper-treated mask could catch and filter out minute particles and virus-tainted droplets The equipment may serve as a useful barrier against artificial blood.

According to sources, the performance indexes for the product are comparable to those of surgical masks.

The new facial cover, dubbed the Yamato Shinku Mask Premium, has elastic ear loops that are treated to prevent viruses, comes in two sizes: a standard mask and one with slightly shorter ear straps.

Yamato Shinku-Kougyo was swamped with over 3,000 pre-orders for a total of 100,000 or so masks before beginning sales. The firm is working on a smaller face mask for children.