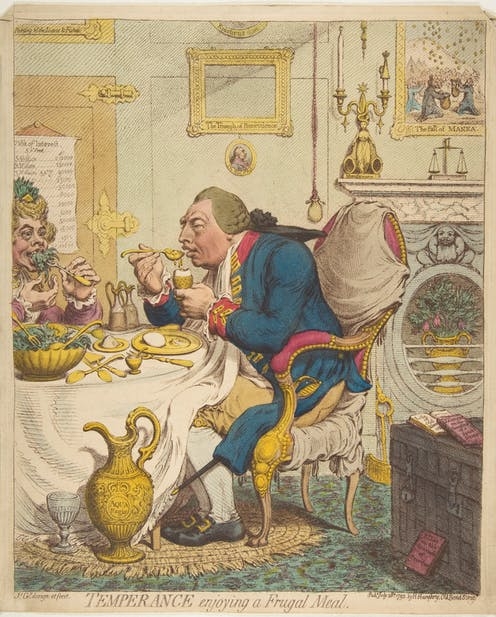 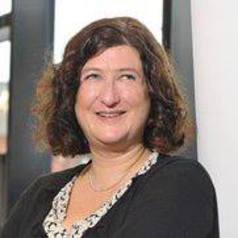 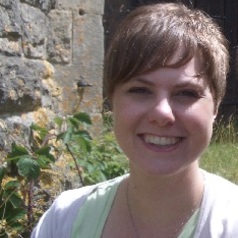 The EU and the UK are now negotiating the terms of their new relationship after Brexit. Food supply problems are a very real potential problem, but we are also having a food-related identity crisis: what will happen to our cosmopolitan and global diet? Will we end up having to replace olive oil with lard or gateau with steamed pudding? Are we destined to return to a diet of roast beef (or Quorn, for the vegetarians)?

The question of what it might mean to be both British and European, however, is one that has been asked for longer than the past three years. Our research team is examining Britishness and European identity, focusing on the eating habits of the English at the end of the 18th century – the first age of nationalism.

We started our project when we came across a book of menus (not yet available online, sadly) written by William Gorton, the steward at Kew Palace. His job was to keep track of food bought and served at the palace, since even George III had to answer to the taxpayer.

The menus reveal that even though England and France were often at war in the 18th century, the British royal family ate a lot of dishes with French-sounding names. Dishes such as “gateau a la duchesse” and “mutton roulade” were frequently on the tables of King George and Queen Charlotte, the equerries (officers of the royal household) and pages, and the princesses and their governess.

For the royal household, French food was not associated with a specific European identity – indeed, “identity” is a recent concept that would have made little sense to 18th-century royals. Rather, French food marked their high social status. At Kew, grooms and servants were served roasted meats: the plain, hearty fare of the English working people. 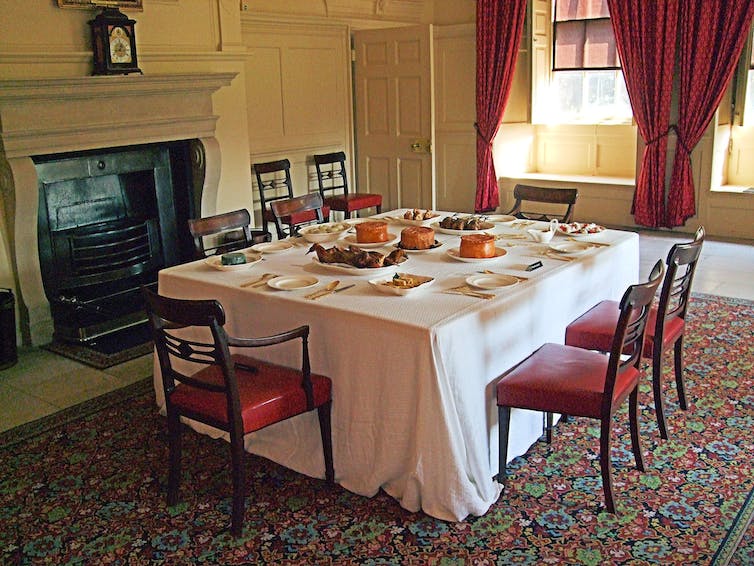 While many well-off Britons dined happily on French-inspired cuisine, it remained a commonly held view that English food was more honest than the food served on the other side of the Channel. Some writers, for example, disparaged French food as “foreign kickshaws”, a word supposedly derived from the French quelque chose (which has come to mean a trinket, but originally was about foreign – French – food). Yet by the 1860s, Mrs Beeton, the most British of cookery writers, could describe “modern cookery” as “greatly indebted to the gastronomic propensities of our French neighbours” – even offering a three-page lexicon of French culinary terms used in English.

French cuisine was not the only foreign influence we found at the king’s dinner table at Kew, although it might have been the most established. French dishes had been making their way into the elite English diet since at least the English translation of Francois Pierre de La Varenne’s The French Cook in 1653. By the mid-18th century, other European flavours were arriving in England via travellers, particularly well-to-do young men who extended their education by taking a “Grand Tour” of European cultural sites. The link between food, travel and nation was made clear in terms such as “macaroni”, the name given to the young Englishmen who mimicked European behaviours.

Here are some other European foods the royal household bought and ate in the winter of 1789, as George recuperated from his first bout of mental illness:

Macaroni: On January 29 1789 the King’s equerries were served macaroni as part of their dinner. Macaroni was not mainstream yet in the 18th century, but by 1800 it was beginning to appear in published cookbooks, which suggests that aspirational middle-class housewives were starting to consider it respectable.

Sausage: One of the dishes served to their majesties on Friday, January 30 1789, was a Mettwurst made out of Richmond pork. This is the perfect marriage of local and global: a German sausage prepared from meat raised nearby at Richmond. Mettwurst appeared often on the royal menus, suggesting that the royal family’s recent German heritage was still present at their table. 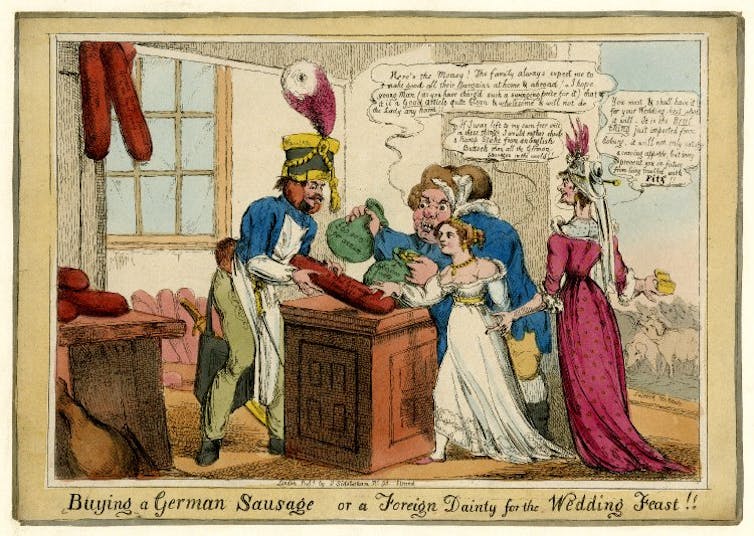 Buying a German Sausage, or a Foreign Dainty for the Wedding Feast by J Sidebotham (1818) © The Trustees of the British Museum

Vermicelli soup: The following day, Saturday, the soup at dinner was vermicelli, showing yet more evidence of Italian influence at the table. Vermicelli appeared in English cookbooks more often than macaroni, and vermicelli soup was one of about five soups that frequently appeared on the royal table. The other soups tended to have French names, such as Soupe Santé _or_Soupe Julienne.

Toasted cheese: On Sunday, Feb 1 1789, ramekins – a dish of French origin – were on the menu for the equerries. This savoury dish of baked cheese, butter and eggs appeared in English as early as 1653, as a recipe in Varenne’s French Cook. By 1801, it was basically toasted cheese.

Parmesan: This famous cheese appeared on a list of the foods received from suppliers on February 6 1789. “Parmezan” was a common feature of palace meals and regularly appeared in cookbooks available to upper- and middle-class domestic cooks. It made its first appearance in an English publication as far back as 1519 – and was considered so fine, that diarist Samuel Pepys buried his parmesan during the Great Fire of London.

It is difficult to identify specifically British foods. Many of the European foods on the royal menu are still in our diet today, as the foods moved from being high status and unusual to the everyday. Even the cultural association of roast beef with English working people is complicated, since across Europe roasts were medically considered a suitable food only for robust and working bodies, not delicate, aristocratic ones. 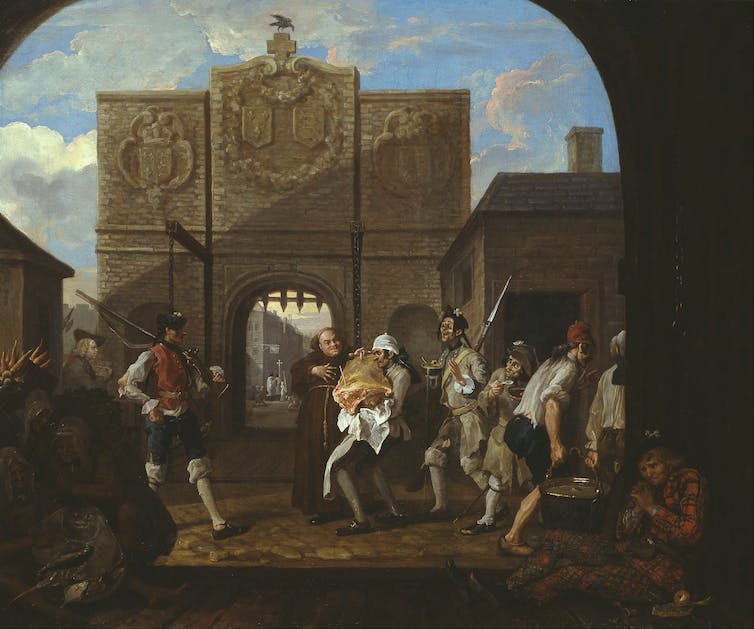 As the late 18th-century menus highlight, Britain has had a long tradition of mixing the local and the European in our diet – even during outright warfare. We will not be giving up our olive oil any time soon.