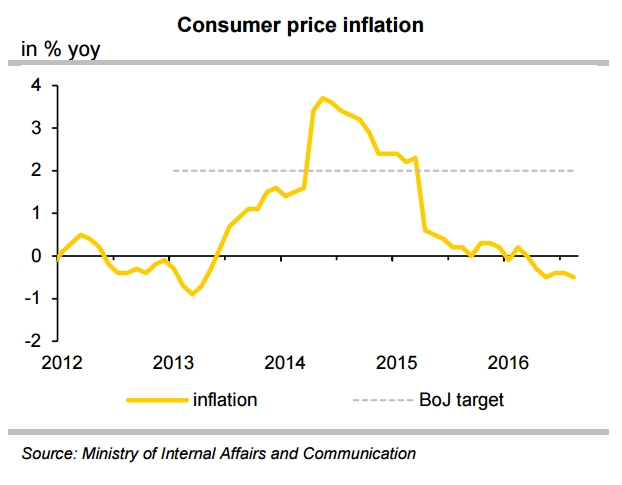 At its two-day policy meeting which concludes Nov 1st, the Bank of Japan (BoJ) is widely expected to keep unchanged its minus 0.1 percent short-term interest rate target. In a quarterly evaluation of its forecasts also due at next week's policy meeting, the central bank is likely to cut next fiscal year's inflation forecast slightly, reflecting weak consumption and falling import costs.

The BoJ's massive asset purchases have failed to jolt the economy out of stagnation and the central bank at its September meeting switched to a policy of targeting interest rates rather than the pace of its money-printing. The BOJ's policy targeting the pace of money printing has been replaced by a complex "yield curve control" with a short-term rate target of minus 0.1 percent and a 10-year bond yield target "around" zero percent.

"Rates to remain unchanged in the foreseeable future. Move from balance sheet expansion to yield curve control (with target for 10y yield at ~0.0%) point towards tapering of asset purchases in the near term (we expect by year-end)," said DNB markets in a report.

Japan headline inflation data released on Friday showed that deflation continues in Japan with little evidence of price pressures. Data released by the Statistics Bureau showed Japan's national consumer price index declined at an annualized 0.5 percent in September. Core inflation fell for a seventh straight month as household spending slumped, reinforcing the view it will take some time for inflation to accelerate to its target.

BoJ governor Haruhiko Kuroda earlier on Thursday played down necessity for more easing in the short-term, squashing hopes of any surprise next week. Kuroda said on Thursday the central bank would not try to push down super-long government bond yields - even if they rise further - because it is focused on controlling the yield curve for out to 10 years.

USD/JPY trading a tight range on Friday as markets await the crucial U.S. GDP data. The pair broke out in an upward direction from a triangle flag pattern in October, and downward pressure temporarily eased. At the time of writing at around 10:45 GMT, USD/JPY was trading largely unchanged at 105.26.