U.S. sectors see slower rates of fall in May

People living on low incomes already see the economy as 'rigged' – so what next after coronavirus?

U.S. ISM non-manufacturing index rises to 45.4 in May, sentiment to continue to rebound in months ahead 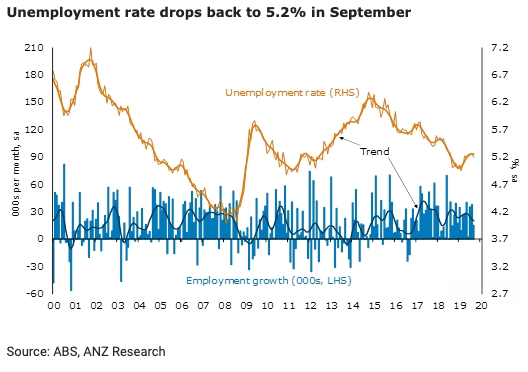 The 14.7k rise in employment in September was the smallest in seven months, aside from the post-election correction in June. However, the 0.1ppt fall in the participation rate to 66.1 percent meant that it was enough to bring the unemployment rate back down to 5.2 percent, ANZ Research reported.

Along with unemployment, the underemployment rate fell 0.2ppt to 8.3 percent, bringing underutilisation down to 13.5 percent from 13.8 percent in the previous month. However, it remains 0.5ppt higher than its February low of 13.0 percent.

Still, the reduction in slack provides the RBA with some near-term breathing space and reduces the prospect of another rate cut as soon as November, the report added.

Not for long, though. With employment growth expected to slow in the near-term, we could see the unemployment rate drift up again. The outlook is dependent on the participation rate. High household debt and persistently low wage growth may be encouraging people to stay in the workforce longer or additional household members to look for work.

"These push factors could keep participation higher than we would otherwise expect as employment growth slows, driving up unemployment and preventing the RBA from its goal to “reach full employment," ANZ Research further commented.