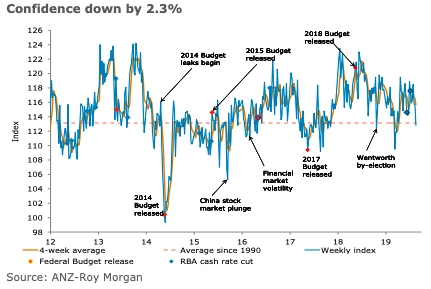 Both the economic sub-indices are below their respective long-term average. In contrast, the measures relating to personal finances rose modestly. Current finances were up by 0.2 percent for the week, while future finances gained 0.6 percent.

"Australian households appear to be troubled by negative global economic developments and the related equity market weakness, with sentiment toward current and future economic conditions down sharply. Views about current economic conditions have fallen materially for three weeks in a row, while those for future economic conditions are at their weakest since October/November last year. The relative buoyancy of sentiment about personal financial conditions indicates that the tax cuts and lower interest rates are having a positive impact on households. But this hasn’t been sufficient to offset the global news flow. The more negative view on the economic outlook is impacting inflation expectations. The past three weeks have seen weekly readings of less than 4 percent," said David Plank, ANZ’s Head of Australian Economics.