Australia’s trend growth rate likely to be between 2-2.5 pct per year for the coming decade, says ANZ Research

Most Asian markets in red, gold hovers around $1,560 mark 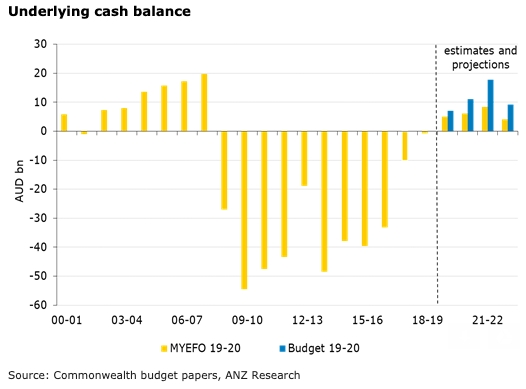 The Australian government has downgraded its expectation of the underlying cash surplus in 2019-20 to AUD5.0bn (0.3 percent of GDP) and across the coming three years. This represents a change of fortunes compared to the last two years of budget updates in which the 2019-20 underlying cash surplus estimates were upgraded, according to the latest report from ANZ research.

Most of the changes since April have been due to expectations of lower receipts, reflecting lower nominal GDP. Downgrades to the outlook for wages and company profits have been the drivers. Company profits are heavily dependent on the iron ore price, which the Government has estimated conservatively.

The Treasury expects receipts to be AUD32.9 billion lower than it expected in April. Spending expectations have also fallen (in the Government’s favour), and these offset AUD19.7 billion of the fall in receipts due to parameter variations, the report added.

In net terms, policy decisions (mainly increased spending on aged care, drought and infrastructure) were worth only AUD8 billion over the four years, small when compared to the size of “parameter changes”.

This illustrates how difficult it is for the Government to push against a slowing economy with fiscal measures when it is politically bound to a surplus. Net debt is expected to peak at AUD392.3 billion or 19.5 percent of GDP in 2019-20, that is a deterioration from budget-time expectation of 19.2 percent of GDP (in 2018-19).

"We expect nominal growth to be stronger than the Treasury is predicting, implying that the fiscal outcome is likely to be better than the MYEFO forecast," ANZ Research further commented in the report.