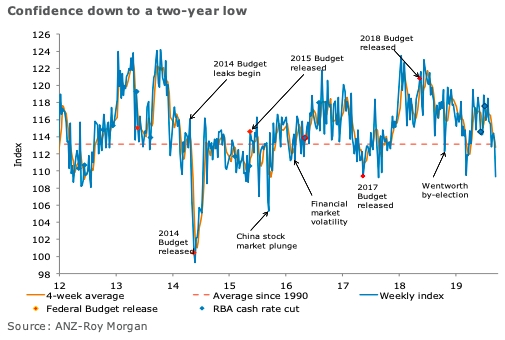 Australia’s ANZ-Roy Morgan consumer confidence plunged 3.5 percent last week to its lowest level in over two years. ‘Time to buy a household item’ was the only sub-index in the positive, eking out a 0.2 percent gain.

The four-week moving average for inflation expectations increased by 0.1ppt to 4.1 percent, despite a small decline in the weekly reading.

"ANZ-Roy Morgan consumer confidence fell to two year low last week. While households feel okay about their current financial situation, they are clearly quite worried about the outlook, for both their own finances and the economy. Last week’s reported fall in business conditions to a five-year low, the weekend attack on Saudi Arabia’s oil and ongoing broader concerns about both the domestic and global economic outlook are now clearly weighing on consumer sentiment. This is a disappointing development and suggests that expectations for tax and interest rate cuts to spur the consumer to lift the economy may be misplaced," said Felicity Emmett, ANZ Senior Economist.