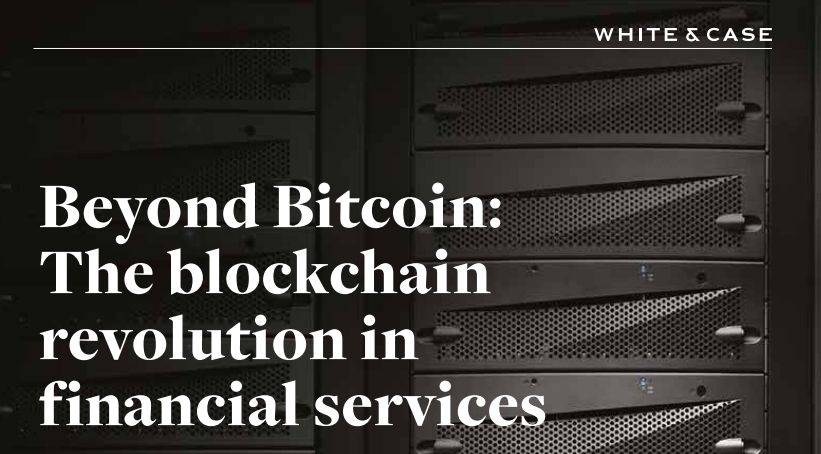 White & Chase, an international law firm serving companies, governments and financial institutions, has released a report that explores blockchain applications in the sphere of financial services.

The report, entitled “Beyond Bitcoin: The blockchain revolution in financial services”, says:

“Blockchain technology is poised to transform the financial sector by increasing efficiency, transparency and security; reducing costs; and unleashing an unprecedented wave of innovation”.

Authored by Kevin Petrasic and Matthew Bornfreund, the report noted that the interest in the technology “exploded” following the realization that blockchain can be used to document the transfer of any digital asset, record the ownership of physical and intellectual property, and establish rights through smart contracts, among other applications.

“For most large financial institutions that are exploring blockchain opportunities, 2016 will be a year of continued innovation and experimentation”, it added.

It quoted Santander’s 2015 report that said that blockchain “could reduce banks’ infrastructure costs attributable to cross-border payments, securities trading and regulatory compliance by between US$15 – 20 billion per annum by 2022.” In addition, the report cited various initiatives in the blockchain space by several institutions and companies such as the R3 blockchain consortium; investment by USAA Bank and BBVA in Bitcoin service providers such as Coinbase and Circle to study blockchain applications; Citi and Nasdaq beta-testing systems built on top of the blockchain technology, and many others.

The paper further highlighted some of the areas and applications getting the most attention in blockchain from financial services companies and regulators. These include trade execution and settlement, asset exchange, physical asset registration, supply chain management, cash reserve management, algorithmic regulation, and smart contracts.

“Blockchain is leading the way for a wave of tech-based financial innovation that is already disrupting the banking and financial sectors”, the report added.

It further said that the technology “fundamentally reorders” the mechanics of financial transactions in ways that were not even thought of just a few years ago. However, it will take time for institutions to realize the full potential of the blockchain technology. The report said that with continued convergence of technology and financial services, the pace of innovation will accelerate, and success will depend on the ability to take reasonable action based on informed experience.

It concluded saying, “Now, at the advent of the blockchain revolution, the challenge that lies ahead for financial services and fintech firms may not be so much fashioning solutions as it is identifying the problems that will require new and innovative thinking. The most successful firms will be those that take advantage of these opportunities to harness fintech and the blockchain revolution.”