Where did India fail to implement economic growth? An economic divergence 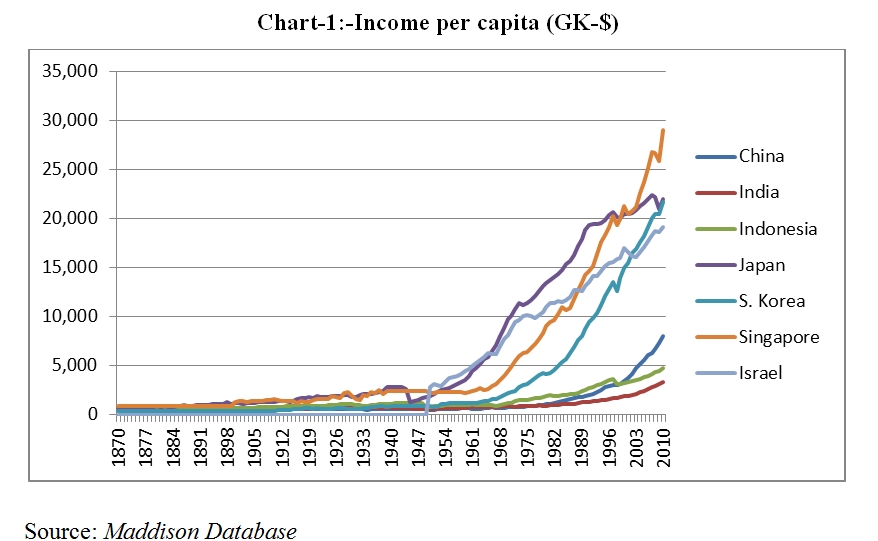 We all know that how rich India was 300 years back. India’s per capita income was comparatively higher than South Korea, China and many other current developed or developing countries. So the question to be concerned of is where Indian brains failed to work and why not India made such a great achievement in its own development?

At the same time, countries like South Korea, Singapore, China, Japan and Israel made a great success in the world economic history. These countries showed a remarkable performance in terms of the growth of per capita income, the standard of living and making things possible which were thought beyond the bounds of possibility for others. These countries which were totally destroyed by wars and imperialist power made themselves powerful and an ideal for others.

South Korea stands to be the best storyteller by converting failures into an opportunity for growing more beyond the limit of forecasting. The primary objective of this paper is to do a data analysis and tell a story about how these countries made this tremendous growth due to the growth in manufacturing.  If we see the history of countries like South Korea, China, Singapore, Japan and Israel, they all were approximately near to India’s per capita GDP in the 1870s.

Especially South Korea was a very poor country in the 1870s, having very low per capita income as compared to all the above economies (Maddison Database). The late eighteen hundreds the Korean Peninsula what we now consider both North and South Korea they were occupied by the Japanese military. In 1910 the Korean Peninsula's formally annexed into the Japanese Empire so the Japanese are essentially an imperialist power there. The Japanese occupation was not a pleasant occupation for the Korean people, the Korean people were harassed in multiple ways, forced labor, forced prostitution and Japanese also tried to destroy the Korean culture. Korea was so destroyed that Douglas MacArthur, US Army General who led the United Nations Command in the Korean War, commented,

“This country has no future; this country will not restore even after a hundred years”

Japan ruled Korea all the way till 1945 when Japan lost World War II and the major victors United States and the Soviet Union captured Korea’s Northern and Southern regions respectively. Thus two new countries came to formation on 9th September 1948 as North Korea and South Korea. China was almost at par with India in per capita income in 1870s while Singapore and Japan were a bit richer than India during the same period.

Chinese economy was one of the poorest countries in the world in the year 1978. The per capita GDP was only one-fortieth of the United States. Since then, China’s real per capita GDP has grown at an average rate of 8 percent per year. As a result, China’s real per capita GDP is now almost one- fifth the United States level. China’s history is been ruled by various dynasties for multiple years. Japanese also continued to infiltrate China till 1937 until an official war declared by China against Japan. Japanese imperialized about 35 percent of the Chinese land mass. In 1949 Communist Party of China came to power for making the country a socialist and modern country. China did not progressed much till 1978 when new measures were made for making market mechanism work better for the country. Deng Xiaoping being a new leader of China in 1990 made a political declaration to give new impetus and reinvigorate the process of economic reform in China.

Singapore is a small open economy with no natural resources. She was not only ruled by British but also imperilled by Japanese for three and half years during World War II. Before the formation of The Economic Development Board-EDB (1961) by Goh Keng Swee, Singapore was having big economic problems like 10-12  percent of unemployment, a large portion of the population was illiterate and many other serious economic issues. EDB made many policy-related changes to make Singapore an open economy for international trade. Singaporean ports gave her a very advantageous position over its neighbour countries to become a trade oriented country. The government offered various tax holidays for 5-10 years to many foreign as well as domestic industries for trading.

In the second half of the 1800s, Japanese realise that they were way behind Americans when Matthew Perry, commodore visited Japan with large war ship. This made Japan to open ports for international trade and combine with each other to stand against the threat of the colonial powers of those days. This was how Meiji Restoration (enlightened rule) took place. After the World War II, Japanese economy adopted a new constitution which was all about liberal democratic practices.

By the 1960s, Japanese had already recovered from the wounds of the World War II to gain an amazing rapid economic growth. The period of 1960s is considered to be a year of an economic miracle. Japan’s economy grew at an average rate of 10 percent thereafter. Japanese economy grew over 1000 percent in terms of nominal GDP from $91 billion in 1965 to $1.065 trillion in 1980. From the Chart- 1 it can be easily seen that Japanese economy made a dynamic shift from the year 1948. Japan was even totally destroyed in 1995 when America dropped two atomic bombs on Hiroshima and Nagasaki. More than 2 lakh people were killed in this barbaric event. Japanese economy totally collapsed; their per capita income decreased by almost 50 percent in 1945. Under the leadership of Prime Minister Ikeda, former minister of MITI (The Ministry of International Trade and Industry) Japan became an export oriented country. More and more expenditure and investments were done on Japanese infrastructure: building highways, high-speed railways, subways, ports, airports and dams. The Ikeda government made Japanese trade more liberalized towards export.

India and Israel started their journey together at the same stage in 1947-48 when India earned independence from the British Raj and Israel as a country was formed. In 1948 Israel was fighting a war with its Arab neighbours. The most immediate economic problems faced during the war were: to finance the ongoing war, to accept any immigrant who wanted to be a part of free Israel; especially refugees from Europe, to provide basic needs to both the new and old population and create a government bureaucracy to tackle all these economic problems.

If a country has a good story to tell, they always prosper. So, if we talk about stories, the above countries have done something to be told and learned. Now if we compare India with all the above countries, India is lying below everyone in income per capita. It is very important to know that what all these nations did right and India did not. The first most important thing to see is the average change in per capita income of India in comparison to other prospered countries. India’s average change in per capita income stood around 1 percent p.a, while for China, it stood around 2 percent p.a and for South Korea, Singapore and Japan it was similar around 3 percent p.a. (Maddison Database-2013).

In respect to this, South Korea has the greatest achievement among all. Their per capita income in the year 1870 was around GK-$ 337 and now they are almost six-times richer than India. General Park, the third President of South Korea gave the country a goal towards which they could move for their economic development. General Park made South Korea an exporting hub for cars, steel, electronics and much more. Japan was only little richer than India, having GK-$ 737 in the 1870s. Now the Japanese are also about six times richer than India. China also did something much similar to South Korea and Japan. Their per capita income rose from GK-$ 530 in the 1870s to GK-$ 8032 in 2010. China’s major reason for higher economic growth was opening up of the domestic market for manufacturing.

Now, China’s per capita income is double than that of India; while they started pretty close together, the Chinese economy took a dynamic shift and became the world’s fastest growing economy with 10 percent annual growth rate since the last 30 years. Israel is almost five times richer than India in terms of per capita income.

Singapore, 150 years from now was as similar to India with approximately the same per capita income of GK-$ 864. After gaining independence on 9th August, 1965 Singapore made some crucial policy changes in the government, especially regarding trade liberalisation. Singapore was influenced by Israel’s ability to leap over its Arab neighbours who boycotted them and trade with Europe and America. Lee being the first prime minister of Singapore knew that to be successful they had to connect with the developed countries and convince their multinational corporations to manufacture and trade with Singapore. Singapore is now nine times richer than India in terms of income per capita.

These countries prospered due to their growth in manufacturing. Manufacturing is the key sector which has shown the capability and power to accomplish any economic development goal. Manufacturing has always remained a sector of concern for the Indian economy, ever since the trade liberalisation period. Most recently, it has become a worrisome topic, given the declining trends exhibited by the Indian manufacturing sector, both in absolute as well as relative terms. Starting from 1950, right up to 1990, the sector’s average annual growth rate has been around only 6 percent, a figure really to be concerned about.

Lastly, these countries narrate to India a very good story about where India can see her accounts and find that what she really did and did not. These countries made some sacrifices and earned this development for their people. We just took sixty-six years to implement food security.