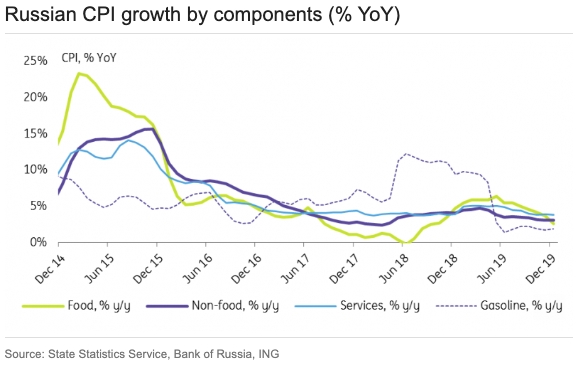 Russia ended 2019 on a disappointing note in terms of consumer price inflation (CPI), which dropped to 3 percent y/y, close to the Central Bank of Russia’s (CBR) lower target range and is expected to fall nearly to 2 percent on a temporary basis during the first quarter of this year, according to the latest research report from ING Economics.

Looking at the CPI composition, food products (38 percent of consumer basket) seems to be the sole disinflationary component, with food CPI slowing from 3.7 percent y/y in November to 2.6 percent y/y in December on a higher statistical base, while non-food CPI growth stayed unchanged at 3.1 percent y/y amid accelerating gasoline price growth, and services CPI decelerating only marginally from 3.9 percent y/y to 3.8 percent y/y.

Global grain prices, seem to be heading north again after showing a negative to flat y/y performance in the middle of 2019. Global wheat prices in US dollar terms were up 11 percent y/y in December 2019 and flattish in rouble terms, with roughly similar expectations for 1Q20, depending on RUB performance, the report added.

Inflationary expectations, as reported by the Bank of Russia, deteriorated in December both for households and corporates, which may suggest some reassessment of the CPI prospects after November's Black Friday promotional discounts.

In the meantime, the consumer sentiment index in December was reported at 95 points, which is 6 points higher than a year ago, while retail trade growth accelerated to 2.3 percent y/y in November, the highest level in 11 months, suggesting a lack of demand-driven constraints to CPI growth.

"While we agree that the likelihood of that scenario has increased, we still believe that the final decision will be a close call, and see the following arguments against a cut," ING Economics further commented in the report.