Oil in Global Economy Series: Future of oil can be seen in present of coal 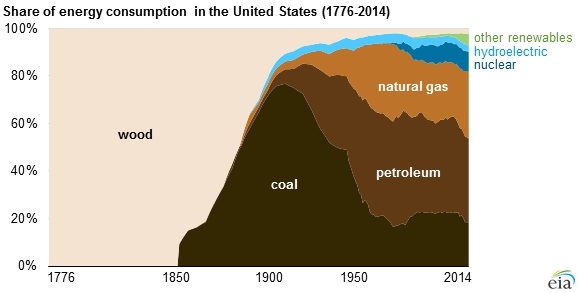 Well, I haven’t predicted any such but that nonetheless happened. When world’s largest private sector coal mining company Peabody Energy files for Chapter 11 bankruptcy, you are bound to feel that there is something wrong about the sector.

Well, if you have thought, Darwin’s evolution is just about living animals and plants, you got or thought it wrong. Key points in that theory was habits, changing habits.

To be very frank, we have just changed our energy habits. We are steadily decarbonizing our energy sources. About 200 years back wood was the primary source of energy, today we use wood but not as a major source of energy (sometime it can be, in time like “Day after Tomorrow”). Then came coal, oil and we moved away from wood.

Similar is on the go. We have nuclear (which is proving to be a bit risky, post Fukushima-Daichi accidents), natural gas and renewable energy resources and after Copenhagen summit (COP21), it is up days for new energies and down days for the carbon intensive ones.

This year, in U.S. natural gas taken over coal as a major source of fuel to produce electricity and by 20135 it is expected that gas will outpace oil as a primary source of global energy, so anybody looking to bet big and long in future of oil, should probably look at the present of coal before.