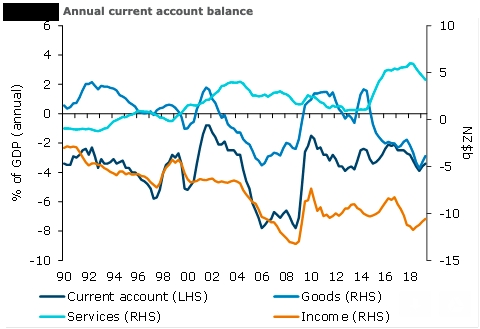 New Zealand’s annual current account deficit narrowed from an upwardly revised $10.8 billion in Q1 to $10.2 billion in Q2 (or in ratio terms, by 0.2 percentage point from 3.6 percent of GDP to 3.4 percent). In seasonally adjusted terms, the current account deficit narrowed $0.1 billion from Q1, led by a narrowing goods deficit, with exports posting a decent lift, ANZ Research reported.

New Zealand’s net international liability position widened $2 billion from Q1 to $165.9 billion, but was broadly stable as a share of GDP at 55.3 percent.

The goods balance posted a deficit of 1.3 percent of GDP, versus a long-run average of +0.8 percent, reflecting still-buoyed domestic demand. The services balance posted a surplus of 1.4 percent of GDP, above its historical average of +0.8 percent, which is a testament to solid growth in tourism exports over the past few years.

And the income deficit of just 3.5 percent of GDP remains narrower than its historical average of 5.1 percent, reflecting low global interest rates.

The unadjusted goods balance pushed further into surplus (from $0.2 billion to $0.9 billion), as imports lifted less than exports. Solid seasonal gains for fruit, meat and dairy exports contributed, and so too did the lift in the goods terms of trade (if the OTI is anything to go by), with meat prices benefiting from significant supply disruptions in China’s pork industry.

The unadjusted services surplus narrowed from $3.0 billion in Q1 to $0.6 billion in Q2 as exports dipped from their seasonal peak and more kiwis went on overseas holidays to escape the winter.

In seasonally adjusted terms, the current account deficit narrowed $0.1 billion from Q1, led by a $0.2 billion narrowing in the goods deficit as the services surplus remained stable and the income deficit widened $0.1 billion.

New Zealand’s net international liability position (NILP) was a bit more stable than has recently been the case, widening just 0.1 percentage point of GDP to 55.3 percent (or from $163.9 billion to $165.9 billion). Both assets and liabilities lifted in the quarter.

"Services exports will be supported by the weaker NZD, but with tourism a highly discretionary form of household spending and global growth waning, we expect the services surplus to narrow slightly over time. The recent dovish tilt by global central banks suggests the income deficit will remain contained. But with the stock of debt expected to continue lifting, we still foresee a gradual widening," ANZ Research further commented in the report.