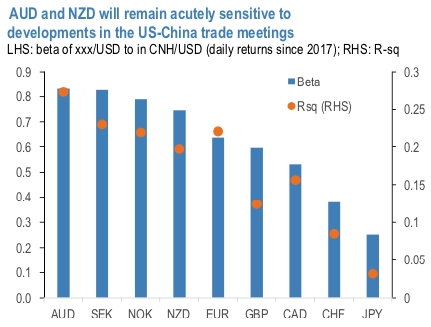 We came into this week slightly lighter on risk given the unpredictable nature of US-China trade talks. Squaring-off AUDUSD shorts in cash trade has left us with two traditional risk-off trades in short AUDJPY and NZDJPY, which we structured via limited loss options with this very risk event in mind. These trades have trimmed some P&L as the week has worn on and as hopes have built through the first full day of meetings. What happens in the remainder of the trip is anyone's guess - but a mini deal of sorts does seem to be a possibility and could encompass a currency agreement. While we have modest expectations regarding the robustness of such an agreement, its announcement would perceivably add some support CNH. This is of course important for AUD and NZD, given the relatively high betas to USDCNH and the trade war as a whole (refer above chart).

It is worth bearing this in mind as the trade meetings conclude this weekend and attention again turns back to global growth; next week’s release of Chinese activity data will be among the most important data releases. Trade war aside, the antipodeans remain leveraged to the China growth slowdown and will therefore take their cues accordingly next week.

Meanwhile, we remain broadly bearish on AUD and NZD for local reasons that will be in focus next week.

First and foremost, Australia releases its employment data on the 17th. Recall that RBA forward guidance was strengthened to explicitly achieving full employment, a shift from simply lowering it. Given that November looks close a coin-flip for an RBA cut, an unemployment outcome strongly on either side of 5.3% could be meaningful for policymakers. This could impact our AUDNZD call option that we sold to finance our AUDJPY exposure, which is otherwise generally insulated from sentiment swings from trade developments at the moment. New Zealand meanwhile gets quarterly CPI, though this should be slightly less impactful for near-term RBNZ implications (88% priced) but nonetheless important gauging the progress back towards the inflation target. Ultimately, with both central banks looking like they'll ease policy further, along with a Fed that's cutting and global growth that has yet to find an obvious floor, we prefer to stay short the antipodes in the medium-term.