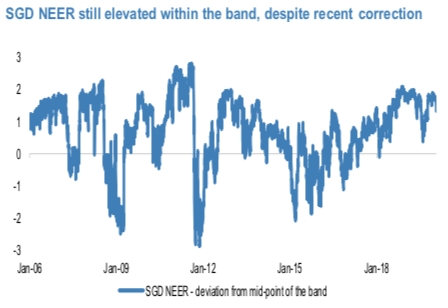 Thailand was the latest country in Asia yesterday to slash the growth forecast for this year due to the Covid-19 outbreak (to 1.5-2.5% vs 2.7-3.7% previously). Thailand’s economy was already slowing before the outbreak due to the budget delays, drought, and slowing exports which was accentuated by the strong THB. Thailand’s economy slowed to 1.6% yoy in Q4 2019, implying 2.4% for 2019. The growth downgrade followed Singapore’s growth revision yesterday to -0.5-1.5%. Both Thailand and Singapore will be hard hit by the reduction in tourism from China. Chinese tourists accounted for 28% and 19% of total arrivals for Thailand and Singapore respectively last year.

In response, Thailand and Singapore have both eased monetary policy since the start of the year via weaker currencies and in Thailand’s case, by an additional 25bp rate cut to 1% in early February. THB and SGD are the weakest currencies in Asia vs USD year-to-date, down 4% and 3% respectively. The next central bank in ASEAN that is likely to cut is Bank Indonesia (BI) this Thursday, by an expected 25bp cut to 4.75%. We also look for a more expansionary fiscal response from these countries, starting with Singapore’s budget today.

Overall, we look for all the policy levers to kick in to offset the Covid-19 outbreak shock and this should entail a continued depreciation bias for ASEAN currencies near term.

Even with the adjustment in the past week in the SGD NEER we still sit comfortably above the mid-point of the band (+125pts based on our estimate, refer above chart). At face value, there seems to be ample for further downside in the NEER. Before the onset of the coronavirus the risks around a MAS easing at the April policy meeting were still skewed towards an easing.

Overall, there is a clear risk that the same safe haven related flows are not as supportive in the first half of 2020 as they were in 2019. Coupled with increased MAS easing risks and a still elevated SGD NEER in the band (+125pts on our estimate), opens a window for short SGD positions.

The preference is to express this view through a narrower basket rather than the whole NEER. Specifically, we enter into a short SGD position against the USD and INR in equally weighted terms via 3 month forwards. Long USDSGD via ITM call options cover MAS easing risks and broader USD/Asia sentiment, whilst short SGD against INR is a positive carry trade and we still see the current environment being conducive to INR total returns. USDINR will follow the broader USD/Asia trend but is less exposed to concerns around a renewed slowdown in regional growth and lower commodity prices supports an already very healthy overall balance of payments position. Courtesy: Commerzbank