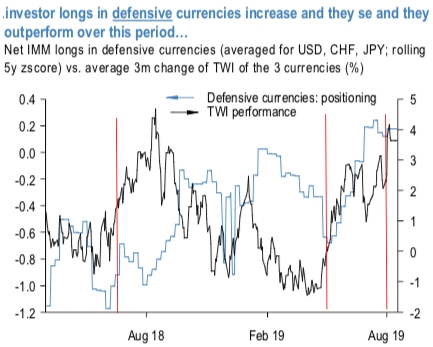 FX markets found a footing this week despite a shaky start. Following Trump’s announcement last week of 10% tariffs on the remaining $300bn of imports from China, trade tensions appeared to have escalated even further. China ordered a suspension of US agriculture purchases and the CNY fix on Monday indicated a bias for a weaker currency which shook markets and prompted the US to give China the designation a currency manipulator.

As trade tensions simmer, central banks have responded in a race to the bottom, as several of them cut rates pre-emptively given rising global risks. In G10, the prime example of this was the RBNZ who delivered a surprise 50bp rate cut (25bp was expected). In EM, India, Thailand, and Philippines all cut rates this week as well. The net result was that rates fell even more across the board. Within G10, the outperformance came mostly from currencies where the central banks have limited room to cut rates — EUR, SEK, CHF and JPY all outperformed.

The currencies with safe-haven sentiments only price in the growth revisions in hand thus far:

At this time, a perspective of defensive currencies appear fairly priced to only the growth outlook revisions that have occurred thus far and that additional growth vulnerabilities are not yet discounted (refer 3rd chart). The timelier indicators of growth momentum are still negative for nearly 2/3rdof the countries we cover so still indicating downside risks to growth.

The backdrop leaves us defensive on FX, although admittedly the combination of poor liquidity in August and headline risk will likely keep market moves erratic. We remain positioned along with the three themes of:

1) Short high beta FX where central banks are likely to keep easing and have the room to ease further (AUD, NZD),

2) long a combination of JPY, CHF, and JPY on trade tensions, soft global growth, and late-cycle dynamics, and

3) Short EUR vs CHF and JPY on ECB easing and poor growth (recent Italian political developments are unlikely to have a sustained impact on EUR; more on this below).

While you observe AUD’s underperformance in the medium-term perspective since August 2018, was majorly due to the cooler outlook for global growth, with China especially in focus, as well as growing expectations of RBA rate cuts. AUDNZD is extremely undervalued, according to interest rates and commodity prices, and there are early signs of a reversion towards fair value which could take the cross towards 1.0750 over the next few weeks. Courtesy: JPM