6 Alternative Investments In A Down Market

Yum Brands in advanced talks to sell KFC in Russia

UR20 Cobot Unveiled by Universal Robots

How To Choose The Right Online Casino For You In Australia 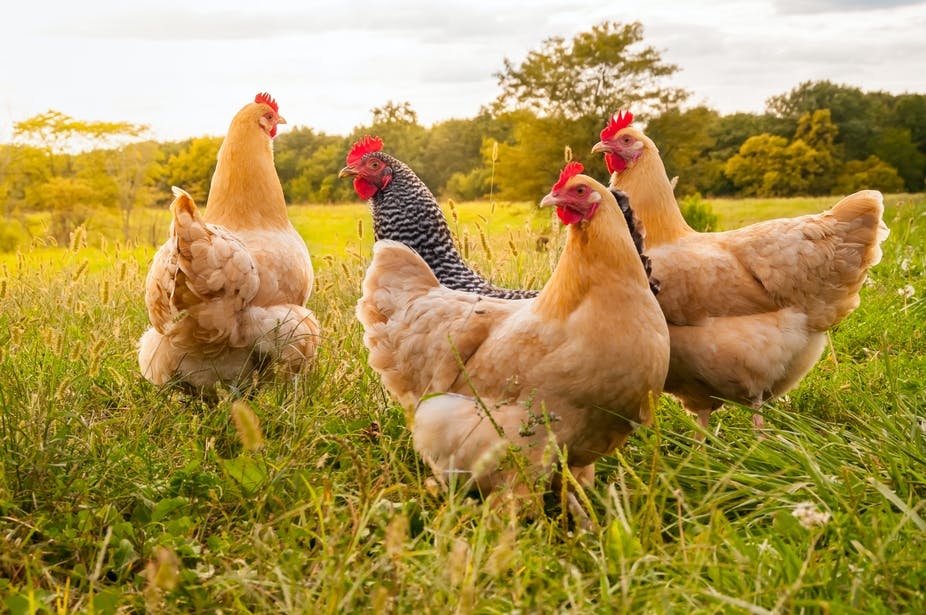 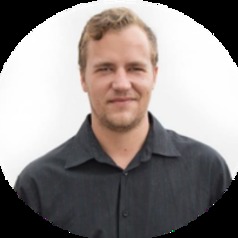 In 1928, microbiologist Alexander Fleming’s discovery of penicillin was hailed as a scientific breakthrough. In the nearly 100 years since then, scientists have discovered numerous other antibiotics that have saved billions of lives.

However, bacteria have become increasingly resistant to these treatments. There are two reasons for this: the overuse and misuse of antibiotics by humans, and the introduction of antibiotics to agriculture.

During 2021’s World Antimicrobial Resistance Awareness Week, the World Health Organisation (WHO) repeated a warning it had issued before: antibiotic resistance is rising to dangerously high levels globally. Globally it is estimated that antibiotic-resistant bacteria kill between 700,000 and several million people every year.

Resistance to antibiotics leads to a situation in which previously treatable infections are becoming harder – and sometimes impossible – to treat. Without urgent action, the world is heading for a post-antibiotic era. Common bacterial infections could once again become frequent killers.

One way to address this crisis is to cut back on the unnecessary use of antibiotics. Some countries are doing this by banning the inclusion of antibiotics in animal feed as growth promoters. This is because when humans consume meat or chicken, we ingest not only the antibiotics added to animal feed, but also antibiotic resistant bacteria.

A 2018 joint report by the WHO, Food and Agriculture organisation and World Organisation for Animal Health found that only 42% of countries have limited their use as growth promoters. Most are in Europe; only a fraction of countries in Africa and the Americas have taken these steps. The agricultural sector desperately needs alternatives to maintain animal health without detrimental consequences to human health.

The term “antibiotic growth promoter” describes the administration of antibiotics at a low, sub therapeutic dose as a preventative measure. It’s not entirely clear why antibiotics influence livestock growth. However, research suggests that they possibly promote growth by depressing the growth of microbes that are toxic or that steal nutrients from the host, leading to increased nutrition utilisation and reducing the energy that must be invested in maintaining immune responses.

One alternative to this is the use of probiotics, rather than antibiotics, in animal feed. I am a microbiologist and have developed a probiotic for chickens. Most probiotics on the market are not developed for a specific host; ours is developed specifically for chickens and contains multiple bacterial strains, which each target different areas of the gut to strive for complete gut protection.

My research shows that the probiotic has numerous beneficial characteristics – both for chickens and the humans who will ultimately eat them. The probiotic decreases the presence of pathogens in the animal’s gut and can be used safely on a daily basis.

Probiotics are health-promoting bacteria that naturally occur in the intestine of any animal with a gut. They have a mutually beneficial relationship with the host. A large body of research has shown that probiotics may improve animal health and growth performance. They do so by modulating nutrition and digestion, changing the microbial composition in the intestine, and by stimulating the immune system.

A chicken’s intestine, like a human’s, is home to a complex microbial ecosystem, the microbiome. It consists of trillions of microorganisms living in symbiosis with the host. These interactions are important for development, health, nutrition, and digestion. 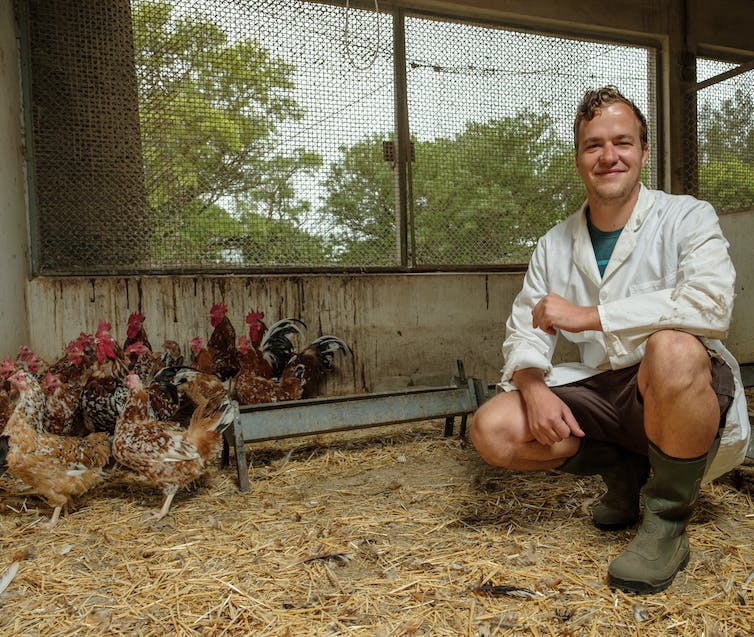 The author with some of his probiotic testers. Stellenbosch University

We developed a probiotic for chickens because they are the most farmed animal in the world. There are about 135 chickens for every cow, and three for every human.

The first step in developing a chicken probiotic was to obtain the guts of 25 free-ranging chickens. Free-range chickens were chosen rather than housing-reared birds because they are exposed to the environment and so acquire a natural gut microbiome. The guts were then mashed into a liquid and plated on several hundred Petri dishes. As you can imagine, the resulting smell made me very unpopular with my colleagues and I had to set up my lab in a separate room.

As soon as bacteria started growing, hundreds of different bacteria were isolated and identified to species level.

The isolates were then screened for various beneficial characteristics. These included ability to survive transit in the gut, ability to colonise the gut, production of enzymes that can assist with digestion, and production of antimicrobial compounds that can inhibit pathogens. After eight months, I identified six beneficial bacterial species. Over the next four years I tested the multi-strain probiotic’s safety and its ability to decrease the presence of pathogens in the gut of chickens.

We found that the multi-strain probiotic was safe, increased bird immune responsiveness, and was able to decrease pathogen levels in the gut.

The resulting probiotic, ProbiGal™, is a water based probiotic additive administered in the animals’ drinking water. ProbiGal™ has been extensively tested in intensive rearing settings. It will be launched in South Africa after regulatory approval has been granted by the Department of Agriculture, Forestry and Fisheries. Thereafter, we plan to launch it in the US and Brazil, two of the world’s largest poultry producing countries.

Much more – including an outright global ban of antibiotics in animal feed – remains to be done. But products like these are one step in the right direction: an example of an environmentally friendly alternative that’s good for animals and humans.