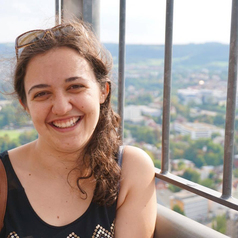 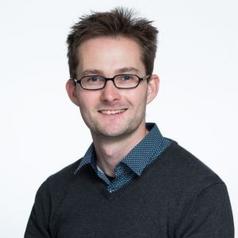 Antibiotic resistance is a worldwide problem to the extent that there is a grave risk that common infections will soon become untreatable. Meanwhile, vaccines developed nearly a century ago still protect us from deadly diseases. What might explain this difference?

Bacteria have evolved resistance to every antibiotic ever developed. Sometimes this happened very soon after an antibiotic was first introduced. It took just six years for resistance to penicillin, the first antibiotic, to become widespread in British hospitals.

But resistance against vaccines has only happened rarely. And vaccines have helped us to eradicate smallpox and hopefully soon also polio. A previous study proposed two convincing arguments to explain this phenomenon, by highlighting crucial differences between the mechanisms of drugs and vaccines. 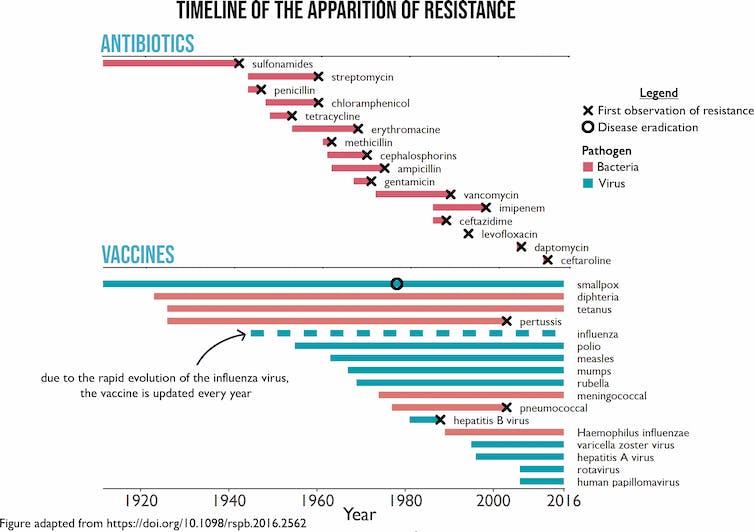 Time from development of an antibiotic/vaccine to first detection of resistance. While resistance has been observed against every single antibiotics, resistance is not a problem for most vaccines.

But first, let’s explain what we mean by resistance and how it originates. During an infection, viruses and bacteria multiply rapidly. In the process, they copy their genetic material millions of times. While doing so, mistakes often happen, with every mistake slightly altering their genomes. These errors are called mutations.

More often than not, mutations have little to no effect or are highly detrimental to the effectiveness of the virus. But sometimes – very rarely – pathogens can get lucky and a mutation can prevent an antibiotic from entering a cell or change the site where a drug or an antibody would bind, stopping them from working. We call these “resistance” or “escape” mutations.

Vaccines work by introducing a harmless part of a pathogen, called an antigen, into the body. They train our immune system to produce Y-shaped proteins, or antibodies, that bind specifically to them. They also stimulate the production of specific white blood cells called T-cells, which can destroy infected cells and help produce antibodies.

By binding to antigens, antibodies can help destroy pathogens or stop them from entering cells. Also, our immune system creates not only a single antibody, but up to hundreds of different antibodies – or epitopes – each targeting different parts of the antigen.

By comparison, drugs, such as antibiotics or antivirals, are usually small molecules that inhibit a specific enzyme or protein, without which a pathogen cannot survive or replicate. As a result, drug resistance usually only requires mutating a single site. On the other hand, while not impossible, the probability of escape mutations evolving for all, or even most, epitopes targeted by antibodies is vanishingly small for most vaccines. 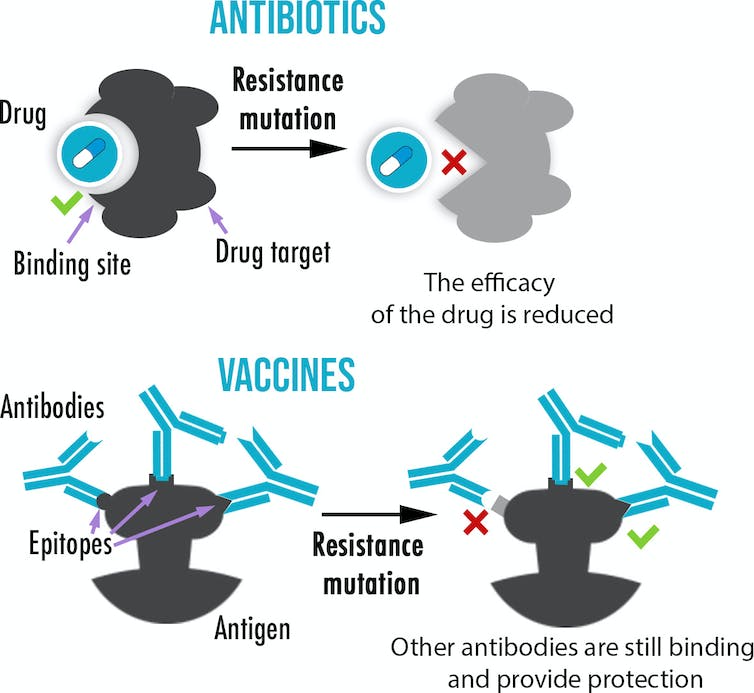 While antibiotics usually have only one target, vaccines create multiple antibodies binding to a different part of an antigen, making the evolution of resistance more difficult. Célia Souque

With drugs, reducing the probability of resistance can similarly be achieved by using several at the same time – a strategy called combination therapy – which is used to treat HIV and tuberculosis. You could think of the antibodies in your body acting like a massively complex combination therapy, with hundreds of slightly different drugs, thereby reducing the chance of resistance evolving.

Another key difference between antibiotics and vaccines is when they are used and how many pathogens are around. Antibiotics are used to treat an already established infection when millions of pathogens are already in the body. But vaccines are used as prevention. The antibodies they create can act at the very beginning of an infection when pathogen numbers are low. This has important consequences, as resistance is a numbers game. A resistance mutation is unlikely to occur during the replication of a few pathogens, but the chances increase as more pathogens are present. 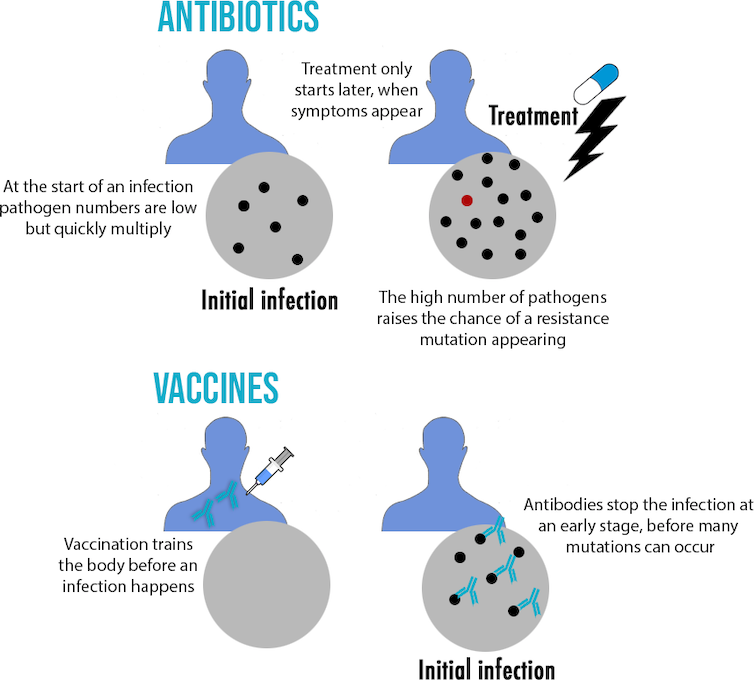 The more pathogens are present during an infection, the more likely it is a resistance mutation may occur. Célia Souque

This does not mean resistance to vaccines never evolves: a good example is flu. Thanks to its high mutation rate, the flu virus can quickly accumulate enough mutations that antibodies may not recognise it anymore – a process called “antigenic drift”. This explains in part why the flu vaccine has to be changed each year.

What does this tell us about vaccines against SARS-CoV-2? Should we be worried about the new vaccines losing efficacy? Luckily, the novel coronavirus has a proof-reading mechanism that reduces the errors it makes when replicating its genome, and means mutations occur much less frequently than in flu viruses.

Also, it has been confirmed that both the Oxford/AstraZeneca and the Pfizer/BioNTech vaccines can effectively stimulate antibodies binding to multiple epitopes, which should slow down resistance evolution.

But we should still be careful. As mentioned earlier, numbers matter when it comes to resistance. The more viruses that are around – as in a rapidly growing pandemic – the more likely it is one may hit the jackpot and develop mutations resulting in a significant impact on vaccine efficacy. If that’s the case, a new version of the vaccine may be necessary to create antibodies against these mutated viruses. This is also why trying to keep infection numbers low through prevention and contact-tracing is vital to keeping vaccines working for as long as possible.