Uncivil society: how the political has become personal in our everyday lives 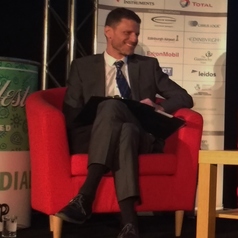 All I wanted to talk about was extraterrestrials – should we be trying to make contact with intelligent alien beings? I spent a week asking people this question in London as an exhibitor at The Royal Society Summer Science Exhibition. The answers I received were, to my surprise, shot through with politics – specifically Brexit – and designed to elicit my own personal perspective.

This experience got me thinking about people’s unwillingness to interact with those who disagree with them on political matters. What might be the consequences of this for a democratic society and what can we do to avert those consequences?

I was part of a team presenting A Message from Afar, which deals with the search for extraterrestrial intelligence (SETI). In my conversations with visitors at the exhibit a large majority of those who opposed SETI gave this rationale for their opposition: let’s not inflict ourselves on the aliens.

Naturally, I had to follow up by asking what’s so bad about us humans, a question that most guests answered by alluding to Brexit as evidence of our dysfunction. I was floored. Did they really believe that Brexit represented the worst of humanity? Not poverty, not ethnic cleansing, not global warming, but Brexit?

Admittedly, this deeply divisive issue was all over the news during the summer, and now will be the focus of the forthcoming election. But the week of the summer exhibition was also a particularly deadly week in the Yemeni civil war, with other major news stories including mass shootings in the US, and India imposing a form of martial law on Jammu and Kashmir. Yet no one mentioned these man-made disasters in their response.

So, could we put this all down to parochial self-absorption? Probably not. At the same time as we were engaging people face-to-face in London, we were (and still are) running an online survey in which we asked a similar question: “Some people think we should send messages into space even if we don’t receive a message first. What is your opinion?”

We offered three possible answers, one of which was: “This is a bad idea, we should ban people from sending messages.” That answer has been chosen by just 3.2% of the 12,631 people who have answered that question so far. So all this Brexit-makes-us-dysfunctional talk at the summer exhibition was probably not a matter of people reporting their sincere feelings about the search for extraterrestrials. Why would these exhibition visitors, as a group, be so much more hostile to the idea of reaching out to extraterrestrials than the survey-responding public at large?

Based on these interactions, my guess is that bringing up Brexit was a means of sussing me out – people were perhaps trying to figure out where I stood on Brexit. Let’s make sure we’re on the same page politically, then we can talk science, may have been the prevailing attitude.

To what could we attribute such an attitude? One possibility is wariness: if I wasn’t on the right side of the Brexit issue then I might either be too stupid to speak knowledgeably about SETI or not trustworthy enough to report the science accurately. Another possibility is that the guests were simply trying to decide whether they liked me enough to spend time in my company and figured my perspective on Brexit was a decent indicator of my likeability.

We already know from data collected in the US, that for many people it is important to have neighbours who share their political views. It doesn’t require a huge leap of imagination to think that what’s true for choosing neighbours could hold when it comes to who we choose to talk to as well.

Either possibility is disturbing. Among the requisites for a functioning democracy is the willingness of citizens to engage with one another, starting from a shared, scientifically grounded viewpoint on how the world is – aside from whatever disagreements they might have about how the world ought to be.

If these conditions don’t hold then there is little hope that the democratic process will deliver in practice what it promises in theory: a way for us to battle over the direction of the country while preserving our mutual tolerance and respect for each other as possessors of equal political status.

Fortunately, there is evidence that we can do something to encourage these attitudes in the next generation of citizens. We know, for instance, that getting schoolchildren to engage in robust class debates over political issues can:

…foster their tolerance, increase their comfort with the nature and ubiquity of conflict existing in the world outside of school … and forge bonds between social groups in a community or nation where people are markedly different from one another.

One model for this sort of intervention is the John Stuart Mill Cup, an annual event at the University of St Andrews for secondary school pupils. It’s a debating tournament, but with a twist. Each team argues a position on the issue that its members sincerely endorse instead of a randomly assigned position. The judges reward a team’s ability to offer an insightful perspective on the issue while demonstrating open-mindedness and respect for those who disagree.

There is a famous feminist saying, “the personal is political”, which urges women to use their own experiences as a springboard for examining the larger systemic problems that contribute to those experiences. Increasingly it now seems that the converse is also true: the political is personal.

As I discovered at the summer exhibition, this means that political discourse is getting in the way of scientific inquiry – a disturbing addition to the list of already politicised cultural domains, including family life and professional sport.

Recently we have witnessed political discourse in the UK turning violent even among MPs, which is downright alarming. So our mission is clear: we must teach children how to challenge each other over political issues without allowing that adversarial stance to spread into their dealings with each other in the other parts of life. This way we can teach them – and remind ourselves – what it is to be a civil society.