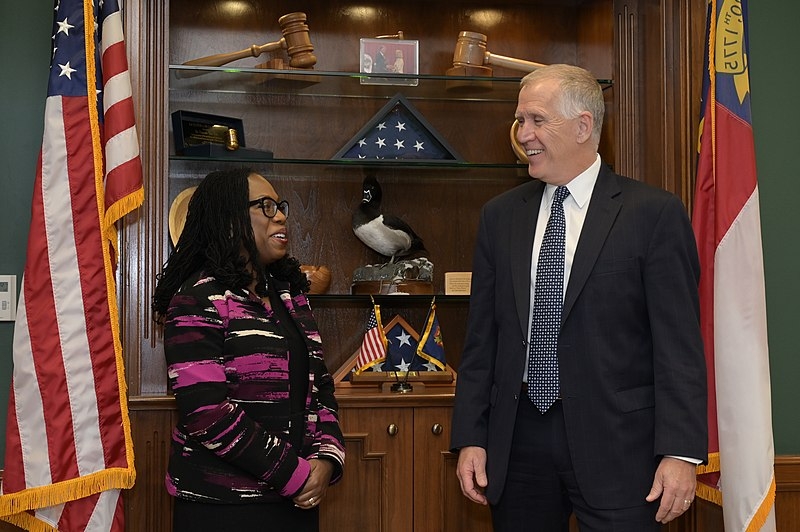 This week is the series of confirmation hearings for US Supreme Court nominee Ketanji Brown Jackson. On the second day of her confirmation hearing, Jackson corrected a Republican senator who claimed that she advocated for all prisoners to be released.

Jackson corrected GOP Senator Thom Tillis on the second day of her Supreme Court confirmation hearing before the Senate Judiciary Committee this week.

Tillis read out a ruling of Jackson’s that suggested she advocated for all prisoners to be released from facilities infected with COVID-19 regardless of offenses committed. Jackson immediately corrected Tillis, saying that her ruling was actually the opposite of what he claimed.

“Senator, if you read two more sentences down, that is precisely what I focus on,” Jackson responded. “This is a case, United States v. Wiggins, where I was setting up high analysis as to why I would not be releasing Mr. Wiggins in this case. He was arguing essentially what I said in that statement.”

He was arguing that the circumstances of COVID-19, which at that point, was rampant in prisons,” Jackson continued. “...The question for courts under the statute that Congress has enacted for compassionate release was whether COVID-19, a pandemic in the jail, was an extraordinary and exceptional circumstance and compelling circumstances should warrant that release.”

A report by Politico revealed that some of the Republican senators on the committee questioning Jackson appeared to have used the hearing as an opportunity to signal their presidential ambitions in the 2024 races. The outlet reported that even their own Republican colleagues noticed that they were using the hearings as a chance to indicate their aspirations for a White House run.

“I’d set the line at two,” Tillis told the outlet. “And bet the over.”

Senators Marsha Blackburn, Tom Cotton, Ted Cruz, and Josh Hawley have all come under fire for their line of questioning towards Jackson at the hearing, using the hearing to ask the nominee about topics considered issues among the right, such as critical race theory, LGBTQ rights, and Jackson’s sentences on child pornography offenders.

However, Rhode Island Democratic Senator Sheldon Whitehouse said that the Republicans are instead giving out “TV soundbites and right-wing network echoes and approval of the Republican dark money apparatus” rather than Jackson.