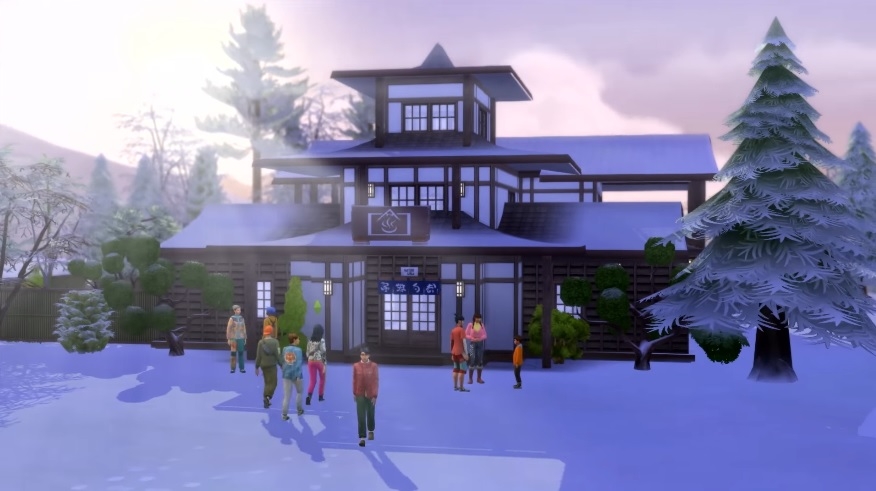 From the official trailer of The Sims 4: Snowy Escape. | Photo credit: EA via The Sims / YouTube screenshot

One of the highlights in every expansion pack has to be the new world it introduces, and it is especially true for “The Sims 4: Snowy Escape.” Its Japanese-inspire Mt. Komorebi brings in four different towns that each promises to deliver unique features and experiences.

‘The Sims 4: Snowy Escape’ gameplay: What to expect from Mt. Komorebi

“The Sims 4: Snowy Escape” introduces the new world named Mt. Komorebi. Its different towns have something to offer depending on the players’ favorite activities in the life sim. The town of Wakaba will serve as an entry point for the new world. Since it is at the base of the mountain, players can expect to see most of the locals and residential buildings here. Players are advised to always be mindful of the local traditions and customs -- such as removing shoes at the entryways -- just like any respectful tourist should.

Further up the mountain is a town called Senbamachi. Considering its location, this is where players can expect to see more tourist-oriented activities such as hiking, attending festivals, and simply admiring scenic views. The Yukimatsu town, on the other hand, is where most of the snow in “The Sims 4: Snowy Escape” can be found since it is located farther up of Mt. Komorebi. Its location makes it the top choice for vacations, so it features more buildings aimed at tourists, such as rental spaces and traditional bathhouses.

The fourth spot will be Mt. Komorebi’s peak. However, players are advised to complete a climbing course that can be found in Yukimatsu before aiming for the summit.

‘The Sims 4: Snowy Escape’ controversy: Why EA had to remove some features from the expansion

The response to the announcement of “The Sims 4: Snowy Escape” was not all positive. Some gameplay features that were included in an earlier version of the expansion’s trailer were found to be offensive, including a scene where a Sim appeared to be bowing at a religious shrine. “The Sims” producer Graham Nardone later addressed the issue, stating they decided to modify the trailer and “made changes” in the expansion’s features “to respect our Korean players.”

Hi, Simmers! We modified the reveal trailer for The Sims 4 Snowy Escape and have made changes to the pack to respect our Korean players. I want you to know that those changes will be in-game when Snowy Escape launches.

Pre-order for “The Sims 4: Snowy Escape” expansion is now live. Remember that the base game is needed to play the expansion that will be released on Nov. 13 worldwide on all platforms.