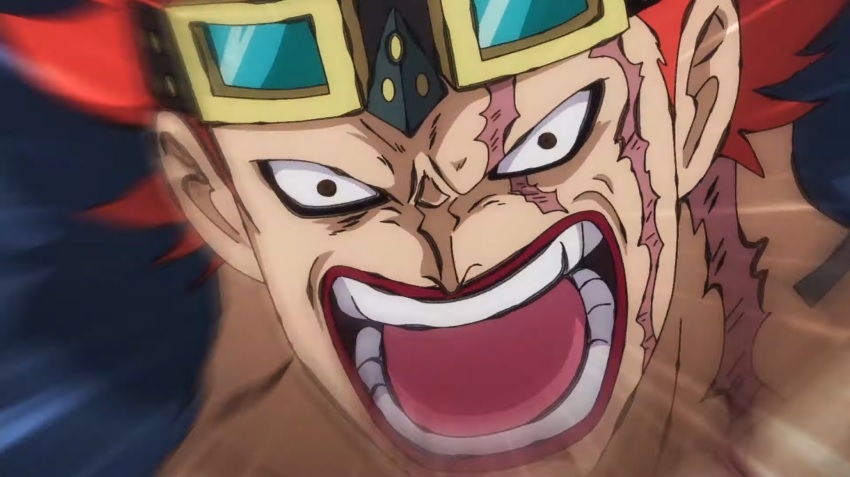 From the official English trailer of “One Piece: Stampede” | Photo credit: ToeiAnimationUS/YouTube screenshot

Many manga fans are certainly hoping for “One Piece” chapter 981 to pick up from the last scene that sets up a massive fight between Eustass Kid and Scratchmen Apoo. While that is one of the most likely sequences to be featured in the next installment, it might also be time to bring back the Tobi Roppo and their search for Kaido’s son named Yamato.

Flying Six catches up on Yamato; Kaido’s son could be introduced

The latest manga installment made no mention of Kaido’s son or the Tobi Roppo as it focused on Luffy, Zoro, and Kid’s early quests in Onigashima. It would not be surprising if “One Piece” chapter 981 shifts the focus back to Yamato, whose face has yet to be revealed.

Yamato is one of the most interesting revelations in the Wano arc so far, and the emphasis given to his supposed strained relationship with Kaido makes his addition to the series even more curious. Hopefully, he is fully introduced in “One Piece” chapter 981 so fans can get more answers on whether or not the father and son are really estranged. Additionally, bringing back the Tobi Roppo if they found Yamato in the next chapter could also mean that Queen’s potential fight with one of the Flying Six would happen soon.

Chapter 980 was a well-received installment for three main reasons. First, it opened with a series of funny exchanges between Luffy and Zoro as they (quite predictably) blew their disguises. This later led to the Straw Hats duo get in trouble with several Gifters. Lastly, Kid did not pass up on the chance of confronting Apoo and unveiled his new attack called Punk Gibson in the process.

While the final panel of chapter 980 showed Apoo getting smashed by Kid’s giant mental arm, it is very likely for Apoo to bounce back. It can be argued that Kid merely caught him by surprise. But considering that Apoo is also one of the Supernovas, the likelihood of him getting back up and fight Kid in “One Piece” chapter 981 is not lost to fans.

Seeing the two fight in more panels would also be helpful for fans to further understand the real power of Kid. While he has been regarded as one of the strongest Supernovas – even being compared to Luffy most of the time – the series has yet to fully demonstrate how powerful he is. And for that to happen against Apoo, who betrayed him in epic ways, would make “One Piece” chapter 981 a very important installment.

Due to the coronavirus, the manga series is still being released in two-week intervals. “One Piece” chapter 981 will be released on June 7, and there is no news yet whether the manga would be returning to its regular schedule after this.