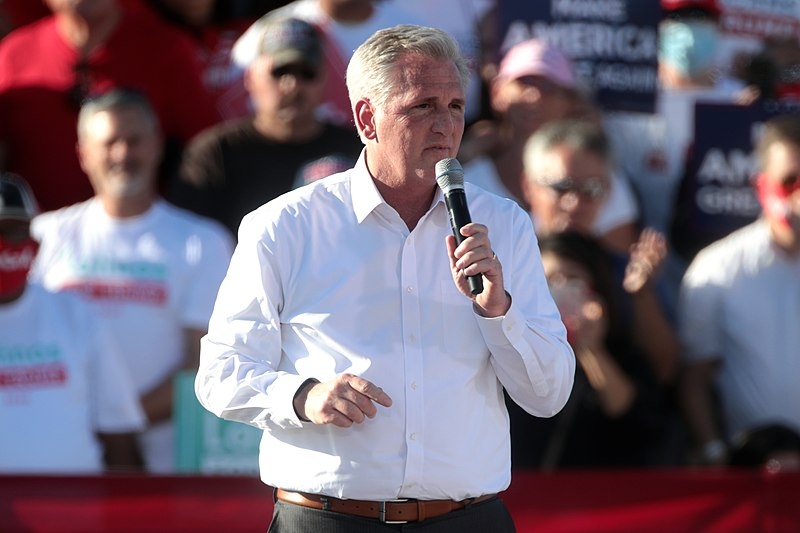 House Republican leader Kevin McCarthy is facing pressure from many as of late, especially towards the formation of the House Select Committee to probe the January 6 insurrection. Now, the House Freedom Caucus is pressuring McCarthy to force a vote in the chamber to oust House Speaker Nancy Pelosi.

The conservative House Freedom Caucus wrote a letter to McCarthy, pressuring him to force a vote on the House floor to oust Pelosi from her post. The letter cited Pelosi’s rejection of two Republicans that McCarthy recommended -- Jim Jordan and Jim Banks -- to serve on the select committee. McCarthy withdrew all his recommendations following Pelosi’s rejection of Banks and Jordan.

The vote that the caucus is pressing McCarthy to act on is the “motion to vacate the chair.” However, the vote would face immediate rejection from the House Democratic Party, which controls the majority, including moderate House Republicans. This may also prove to test McCarthy, who seems to likely need the backing of the Freedom Caucus, as McCarthy seeks to become House Speaker should the GOP win back the House majority in 2022.

Aside from their main concern that was Pelosi’s rejection of Banks and Jordan to the select committee, the caucus also cited other reasons to oust Pelosi from her seat. They cited that the California Democrat allowed remote voting, proxy voting by lawmakers due to the pandemic, and the installment of metal detectors at the Capitol’s entrances following the insurrection. The caucus leaders like Andy Biggs also urged McCarthy to take a more aggressive approach against Pelosi.

It should be noted that the plans to oust Pelosi from her position closely align with a conspiracy detailed in seven points to reinstate former President Donald Trump into the presidency. As Pelosi is the second-in-line to the presidency, the plan called for the impeachment of US President Joe Biden and Vice President Kamala Harris along with Pelosi’s ousting.

However, his criticism of the probe was mocked by users on social media. Some critics said McCarthy failed in his efforts to keep Republicans off the panel and pointed out his complicity in the insurrection.

“You failed, Kevin, you had been offered everything you wanted in a committee to investigate in 1 / 6 and you said no. Now you have to deal with it. You’re the failure,” said one commenter.