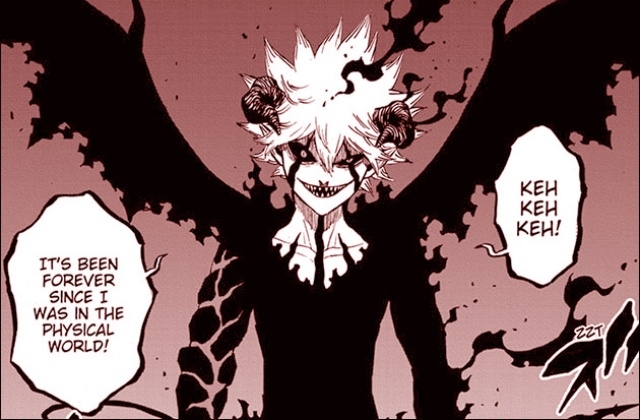 This anime has been offering exciting stories and right now, the manga series is ready to release the “Black Clover” chapter 269. In this episode, the devil is now trying to take over Asta’s body after lending him his power in his previous fight with Dante.

In the last chapter 268, simply titled “Devil,” the devil in Asta was revealed to be Liebe and his backstory was highlighted in this episode. It turned out that Liebe was not really bad when he was younger and he doesn’t have any magic at that time as well.

Liebe was bullied by other devils and one day, he was cast away and thrown into the underworld. He was powerless and found himself in a world where humans reside. Because he is different, humans are fearful of him so they always chase him away.

Later, he met Licita and she took him so humans will never go after him again. Licita possesses magic that allows her to absorb the energy of any living thing around her. She and Liebe eventually lived together as mother and son.

Lucifero was furious and used Liebe's left hand to puncture Licita's chest. With her magic, she absorbed Lucifero's magic and forced him to get out of her son Liebe’s body. Lucifero was shocked and Licita decided to seal him to the Black Grimoire with a five-leaf clover; however, this move resulted in her death.

Liebe was devastated for losing his mother and he vowed to take revenge against Lucifero and the other devils. He wants to kill all the devils and he is determined to do this even if he needs to steal Asta's body to carry out his revenge in “Black Clover” chapter 269. With that said, the reason why he is taking over Asta’s body has been revealed.

‘Black Clover’ chapter 269 will now show if Liebe will be able to steal Asta’s body and what will happen to him later on. On the other hand, the Black Bulls’ training for the battle with the Dark Triad is still ongoing.

“Black Clover” chapter 269 will be released on time. It will be available on Oct. 25, as per VIZ Media.