Are toys becoming more violent ... and should we be worried? 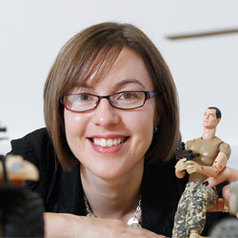 A New Zealand study has reported that Lego has become more violent since the late 1970s. Debates about levels of violence within children’s media are not new, so is this significant? When we consider that Lego is famous for its principles of pacifism we might be tempted to think so. We need to be cautious, however, about such headlines contributing to ill-informed moral panics about the loss of childhood innocence and a toy “arms race” causing children to become more aggressive.

The study examined the changing proportion of Lego bricks that are weapons and Lego sets that contain weapons over the period 1978-2014. Weapons range from swords, halberds and lances as part of Castle-themed sets (1978), to harpoons and knives in Aquazone-themed sets (1995), through to lightsabers and blasters in the more recent franchised Star Wars play sets (1999 and 2007).

There’s a longstanding temptation to treat children’s play as if it occurs in a social vacuum, a childish world of innocence separate from the everyday reality of the adult world. But while we might seek to protect children from the uglier, more morally and ethically challenging aspects of contemporary life, thinking we can insulate children from the world we live in is a falsehood.

Critics of war play frequently treat play as if it occurs in such a social vacuum, with little consideration of the broader societal context in which play happens. Social and cultural values shift with time and it is foolhardy to think that toys and play will not follow these trends. Increasing levels of aggression within toys have to be seen as part of a wider trend within society towards desensitisation of violence. Today, violence is brought ever closer to home through the intensity of round-the-clock news footage of armed conflict and incidents of terrorism, and the use of cultures of fear by world leaders to sustain particular (geo)political ideologies.

When reflecting upon the trend reported in the study, economic factors also have to be taken into consideration. Toy companies have to produce a saleable product – and this tends to be a product reflective of wider societal trends. With the drive towards franchising and diversification of target audiences as marketing strategies (as seen with the Lego brand, prompting the likes of Star Wars, Lord of the Rings and Harry Potter themed play sets, and the targeting of adult consumers) digital media is leading developments in non-digital media. Here we are seeing trends towards fantasy scenarios centred on overcoming imaginary evils.

Scholars have shown this is part of wider cultures of fear within the post 9/11 era. Toys and digital media are, therefore, reflecting the social and political life of their time and contributing to the prevailing geopolitical climate. Childhood is not a sphere of innocence magically shielded from the wider world; it plays an active part in shaping it.

As adults we have to remember that children do not treat toys as we might do, as static objects suspended in time that are designed to communicate particular messages to passive minds. Play is about repetition and surprise – mimicking the things we see around us and experimenting with rules and roles, and how things might be different. Toys may not be used in the way we, as adults (parents, observers, designers), might imagine.

Studies have shown that children are able to clearly distinguish between pretend and real violence. While the former may be enjoyed for its immersive and tactile pleasure, the latter is understood to be dangerous and undesirable.

Comprehensive reviews of play research have also stressed that perceptions of aggression within children may be due to adult misreadings of particular kinds of play. Rather than being concerned with displays of aggression, play fighting is often about social bonding between siblings and friends. War scenarios are often passionate expressions of detailed knowledge about particular characters and fantasy worlds depicted in books, TV and films.

As play is an important means through which children learn to deal with uncertainty, assess risk and develop resilience, is it right to seek to restrict forms of play that we, as adults, might on the surface see as more troublesome?

We have to be careful not to overly restrict children’s lives based on myths about childhood innocence and children’s inability to distinguish between real life and fantasy. Despite the longstanding “war play debate”, we still do not have an appropriate and sufficient evidence base for assessing the link between toys and violence.

It is, however, clear that we need to view toys in a broader social and cultural context rather than making the quick jump to condemn them as scapegoats for our shifting values.